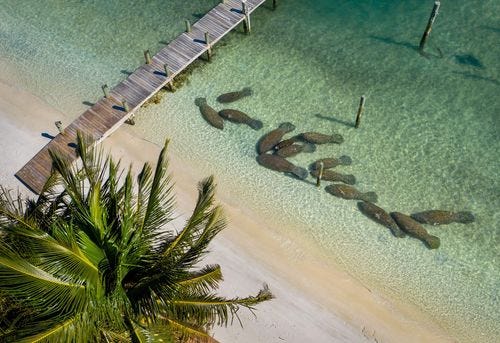 FL - Manatees are dying in droves this year. The die-offs could spell trouble for Florida

Despite their portly frame and inherent meekness, Florida's manatees are survivors.

Despite their portly frame and inherent meekness, Florida's manatees are survivors.

When power plants began popping up along Florida's East and West coasts, manatees learned to follow the flow of the unseasonably warm water.

When boats with sharp motors increasingly flooded their habitats, they learned how to live with debilitating injuries, or tried to.

And when their favorite source of food began to disappear when toxic algae infested the water, they learned to eat less, often at the cost of their health.

Their gentle nature belies a deceptive resilience. Unathletic as they may seem -- they tip the scales at around half a ton -- they're built to endure.

But how much more can one species take?

Decades of environmental stress culminated this year in one of the worst manatee die-offs in recent history: As of May 21, at least 749 manatees have died in Florida in 2021, in what the Florida Fish and Wildlife Conservation Commission has called an unusual mortality event, or UME.

"Manatees are literally that sentinel species," says Patrick Rose, executive director of the Save the Manatee Club, a 40-year-old nonprofit co-founded by Jimmy Buffet. "They're warning us of what else is going to come if we don't do a better job while there's still time to do something about it. If we don't, our own lives will suffer."

Florida, the third-most populous state in the US and still growing, stands to lose more than its state marine mammal if manatees go extinct. The same issues that have caused their mass deaths are disrupting freshwater and saltwater sanctuaries, killing off fish and other species and mucking up the water that millions rely on for their livelihoods. Florida beaches are now as well known for red tide as they are for pristine white sand and watercolor sunsets.

Rose thinks around 1,000 manatees could wind up dead by the end of the year. If manatees continue to die at such a rate, with an estimated 7,500 animals left in the wild (before factoring in this year's deaths), it could be only a matter of years left to save them -- and clean up Florida's water.