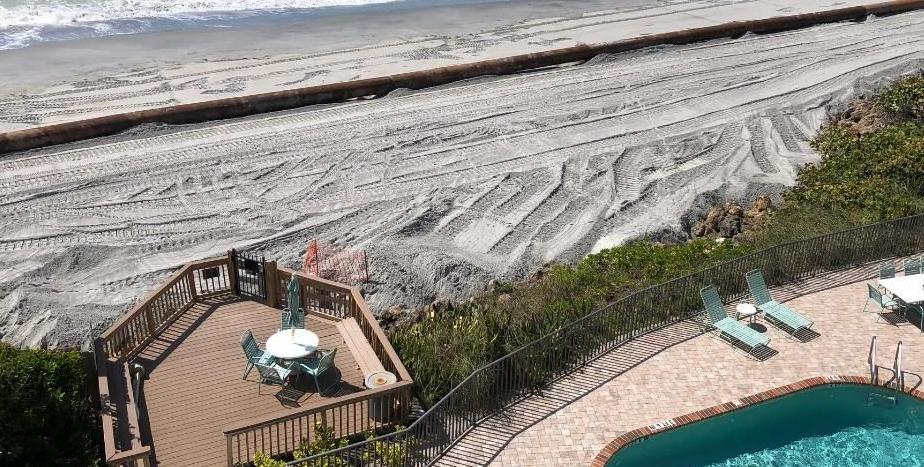 ENGLEWOOD — Boulder Pointe condominium owners are among the Manasota Key property owners celebrating the start of the beach nourishment project this week.

For the first time in a decade or more, Boulder Pointe now has a dry sandy beach and not simply wet sand and a large pile riprap rocks along its Gulf shoreline.

Damian Ochab, a Boulder Pointe resident and president of the South Manasota/Sandpiper Key Association, said he’s been a Point of Rocks resident for nine years and never enjoyed a dry sandy beach in front of the condominium complex.

The Great Lakes Dredge and Dock Company crews started Monday pulling up sand from offshore, spilling out sand along the Manasota Key shoreline at a rate of 2,000 cubic yards per hour, 1,000 linear feet a day.

Great Lakes faced a 10-day delay, due to weather conditions, but anticipates completing the Charlotte County portion of the project by the end of this month, said Public Works project manager Matt Logan.

“They’ve been exceeding their target volumes and feel they can catch up,” Logan said. He also appreciates the support he’s hearing from Manasota Key residents now that the project has started.

“We’re thrilled with the response, people standing behind this project,” Logan said. In years past, the Manasota Key residents were split 50-50 when it came to beach renourishment, with the lines usually drawn between those who saw significant erosion and those who did not.