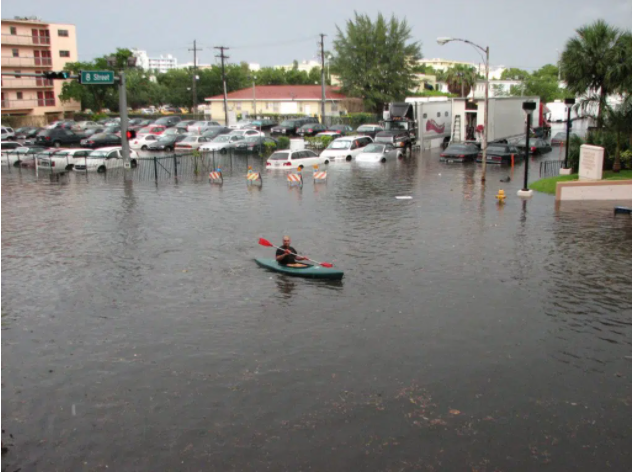 FL - Make 2022 the year you become a climate influencer

In 2009, prior to taking office for his first term, the City of Miami’s mayor-elect held a news conference. When asked about the threat climate change posed to the city and how his administration might tackle the issue, Tomás Regalado said his understanding of the climate issue was that it was still “being debated by scientists.”

At the time, the accelerated planetary warming caused by the enhanced greenhouse effect was well understood, and the Magic City had billions of dollars of ocean-exposed infrastructure along its 10-mile-long coastline. On air, I reported the soon-to-be mayor’s view and contrasted it with the mounting evidence that global warming was indeed a threat to the city. By 2020, Miami had been singled out as the most vulnerable coastal city in the world, with more assets threatened by surging seas than any other.

During the mayor’s first term, Regalado focused on an austerity plan to restore the city’s finances. Nothing was said publicly about the risk of a climate crisis. Behind the scenes, José Regalado, one of the mayor’s sons who was then in his 20s, had moved in with his recently widowed father. José was pursuing an underwater photography career and had traveled to some of the most iconic coral reefs in the world, including the Palau and Vanuatu archipelagos in the tropical western Pacific. He was keenly aware of the effects of climate change on the reefs. And he wanted his dad the mayor to learn about global warming.

José would get up before dawn to join his father in their morning ritual of news and Cuban coffee. He broached the subject of climate, and his dad appeared receptive. “I would bring out a white board, and we started from square one,” said José Regalado. With basic science facts taken from sources ranging from NOAA to YouTube, the son eventually got his father to understand what the City of Miami was facing. To overcome the mental barrier that temporal distance presented—or the perception that sea level rise is something for others in the future to worry about—José took his dad Tomás to pricey high-end condominiums where some days the tide was already flooding the lower facilities. At the time, according to a University of Miami study, Miami was in the midst of an alarming 400 percent increase in tidal flooding events over a 10-year period.

“My son educated me on climate change and sea level rise,” Regalado declared during his second term, a stunning reversal from his earlier position. By 2016, the mayor had introduced a proposed bond issue to borrow money for improvements that would mitigate flooding. While the idea initially failed to be approved in the City Commission, it was later expanded and reintroduced in 2017 to include climate resiliency more broadly, adaptation, and affordable housing, among other issues. With a possible assist from powerful Hurricane Irma, which in September of that year brought a deep and damaging storm surge to Miami, voters approved a $400 million bond in the November 2017 election. Nothing motivates people to vote for flood improvements like seeing five feet of seawater running like a raging river down city streets.