Southeast
Owen Burns' El Verona Hotel and office building on Broadway Ave. (Today's Tamiami Trail) was Sarasota's largest and most luxurious. Later acquired by John Ringling and re-named the John Ringling Hotel, it was demolished despite protestations to save it in 1988. Jeff LaHurd / Sarasota Herald-Tribune 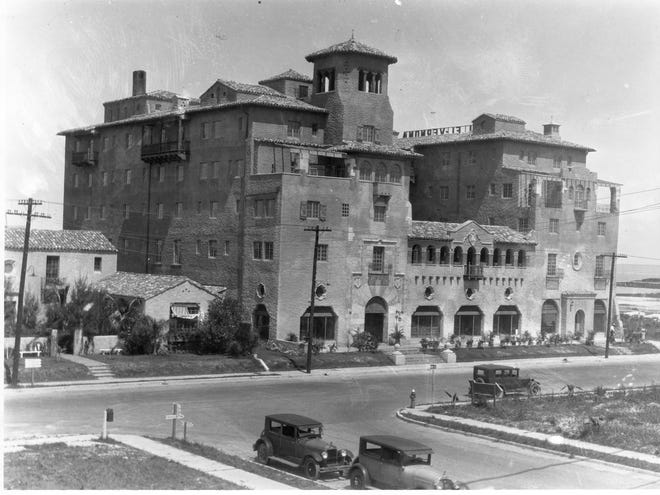 The colonists, who had been promised so much, waded ashore at the end of December 1885 after an arduous journey, and by early 1886, finding little more than wilderness, most had departed, to start anew elsewhere, bitter from the experience.

To recoup their losses, the Company sent the president’s son, John Hamilton Gillespie to put into place the infrastructure required of a bona fide community.

A young gentleman to the manor born, with no previous development experience, he set about the task of making Sarasota not only livable but also inviting.

He grubbed streets, improved the pier, built a fine house for himself, brought a short-lived, short-line railway, established golf here, and constructed downtown Sarasota’s first hotel, the 35-room DeSoto Hotel at the foot of the bay. (The Orange Blossom Condominium occupies the site today.)

In 1905 he completed a two-story rusticated block building at Five Points, and shortly thereafter a similar building for what would become the Halton Sanitarium/Hotel.

Elected the first mayor of the town and known as the Golfing Mayor, he traveled throughout the state, espousing the advantages of the sport to any community wishing to attract tourists.

In 1910 Gillespie sold the remaining holdings of the Company to Owen Burns for the sum of $35,000.

That year, of the community with 840 souls a visitor wrote:

“Sarasota is still a quiet little village and offers no attractions for those who are dependent upon fashion and amusements, but for those who wish to get away from the strenuous life, this care-free existence will bring rest and refreshment.

Gillespie died in 1923, just before the defining land boom for which he had paved the way. He is buried in Rosemary Cemetery — remembered for his prodigious efforts on behalf of his adopted community, known forevermore as the Father of Sarasota.