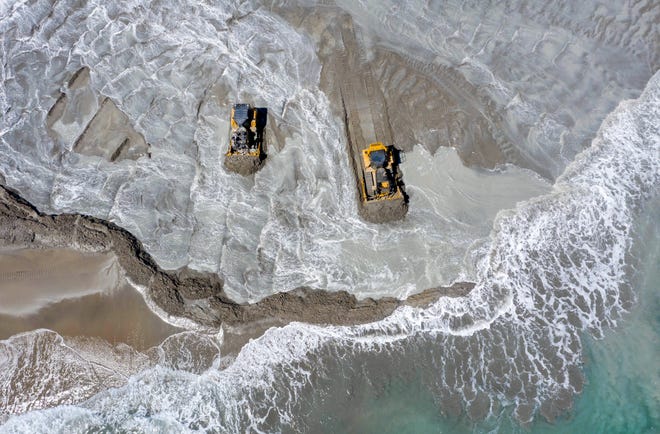 Six months after being replenished with offshore sand and despite recent storms, Midtown Beach and the surrounding coastline is “performing very well,” according to a report by Coastal Project Manager Rob Weber.

Weber presented the current shoreline conditions report to the Shore Protection Board Thursday, with several before-and-after photos of replenished beaches.

The shoreline from Casa Bendita south to Banyan Road, including Midtown Beach, received 700,000 cubic yards of sand. The work began in March and ended ahead of schedule on May 1, despite the coronavirus pandemic.

Weber said that even after Tropical Storm Isaias, which skirted the Palm Beach County coast in August, the beaches remained in very good shape.

“After the renourishment project was completed, more than 100 feet of beach was placed in the Municipal Beach area, and that remains even after Isaias,” Weber said.

Contractor Weeks Marine used two dredges to scoop sand from an offshore site near the Palm Beach Inlet and pump it onto the beach, where bulldozers smoothed it into place.

The U.S. Army Corps of Engineers, which was in charge of the federal project at Midtown, awarded Weeks Marine the contract to do the work for $19.1 million. The Army Corps paid half the cost, with the town, Palm Beach County and the state sharing the remainder.

The project marked the first time Midtown Beach was rebuilt under the leadership of the federal government. Between hurricanes Matthew in 2016 and Irma in 2017, Midtown lost more than 500,000 cubic yards of sand, about half of its volume.