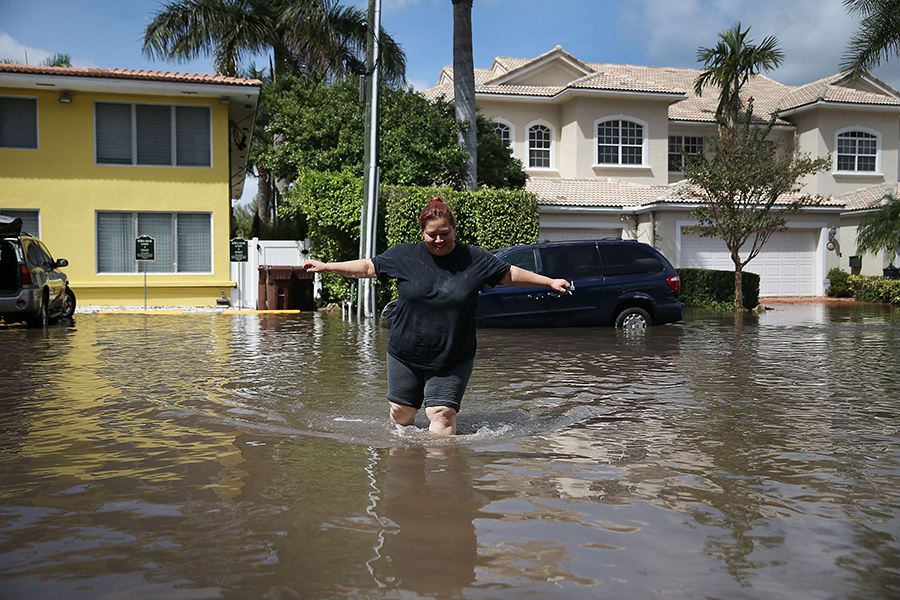 FL - In Florida, it's not winter that's coming. It's the ocean

‘The rate of sea-level rise has doubled. ’Florida’s already in deep with catastrophic weather events likely exacerbated by the effects of climate change, and with so much coastline and coastal living, Floridians have a large stake in dealing with sea-level rise.

Case in point, the St. Augustine flooding in September 2020 from a combination of king tides, a nor’easter and 3 inches of rain. When that occurred, Jacksonville firm Taylor Engineering’s clients started sending in photos, including one of a sea wall that the firm designed and did some of the construction administration for in 2014.

“So, I’m very familiar with the site — I know what elevation it’s at — and it’s retaining water (in the photo), which isn’t necessarily what we want to do,” Angela Schedel, Taylor’s Vice President of Community Resilience, said. “All that water is actually backflow, coming up gravity-fed (pipes) — high tide, just up through the drains.”

Schedel made her remarks as part of the Water, Wetlands and Watersheds Webinar Series hosted by the Howard T. Odum Center for Wetlands at the University of Florida.

High tide-related flooding is recurring on a regular and more frequent basis, as well. Part of addressing nuisance flooding from the effects of climate change is knowing where those spots are. St. Augustine has an online city flood tool, and the same day as the nor’easter that flooded the sea wall, there were 42 flooding incidents reported online around the city — a useful tool coming along for an event you’d rather not have.

“It’s a really cool citizen science of a way for Public Works to be able to say, ‘Woah, they had flooding here,’ and a lot more communities are doing this, unfortunately,” Schedel said. “But it is a good way, if you need data, to be able to say, ‘Hey, take a picture of where you are and take your yardstick so we can measure it.’”

While heavy rains and antiquated stormwater systems are one problem, a lot of coastal flooding comes back to gradual and accelerating sea-level rise. Global mean sea level rose an average of 1.5 millimeters a year from 1900 to 2000, but that’s increased to 3.3 millimeters a year from 2000 to 2021. Similarly, while the global mean sea level rose 6 inches in that century, it’s already increased nearly 3 inches in the last 20 years.

“If you take that 3 inches over 25 years, multiply that by four, that’s a foot,” Schedel said. “That’s a foot in the next hundred years. The rate of sea-level rise has doubled.

“There’s a lot of reasons for it, I’m not a climate scientist — this is just the use case for resilience and why we should really care.”

From an engineering perspective, resilience means the ability to bounce back quickly from adversity and recover without changing into something different. The Florida Resilient Coastlines Program, originated in 2018, is a state government grant effort intended to help pay, without the need of matching funds, for local vulnerability assessments and plans for resilience and adaptation.