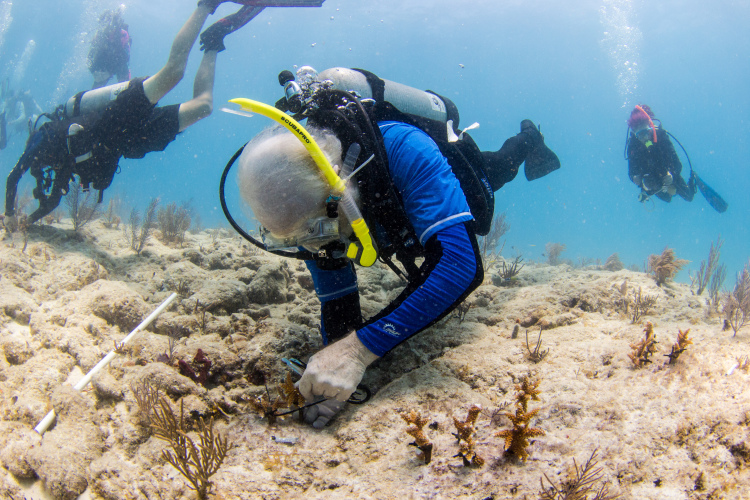 From the combined efforts from the Combat Wounded Veteran Challenge and the SCUBAnauts, Mote planted 300 Stagorn Coral on Hope Reef on Tuesday, June 26, 2018.

A couple hours after midnight, one to seven nights after the August full moon, Florida coral are in the mood.

With a swimmer’s synchronicity, they release their eggs and sperm, which stream toward the starlit surface, “like reverse snow happening in the water,” as described by frequent coral spawning observer Allison Delashmit, the director of operations for Mote Marine Lab’s Elizabeth Moore International Center for Coral Reef Research & Restoration on Summerland Key, on the south side of the Keys’ famous Seven Mile Bridge.

From Delashmit’s perspective, amid a flotilla of “scientists, volunteers, and anyone with a boat that was willing to sit out in the middle of the night and wait for this event to happen,” the annual phenomenon is beautiful, but incredibly inefficient. When the bundles of eggs and sperm detonate on the surface, the latter has 20 minutes to reach and fertilize the former. Chances of a fertilized egg reaching maturity is about one in a million. Every 25 years. That’s in a relatively healthy reef.

The Florida reef, which stretches from the upper mainland to Key West, is not a healthy reef. Stemming from a 2014 infection thought to originate from a dredging project outside Miami, the bacterial blight of Stony Coral Tissue Loss disease coupled with warming seas has left the reef 98% to 99% bleached, a state scientists call functional extinction. Absent a critical density of fit, reproductively capable coral, fertilization in the wild becomes extremely difficult. “So we have to help Mother Nature out,” Delashmit says. Without human intervention, guided by science and supported by tech, the Florida reef won’t survive.