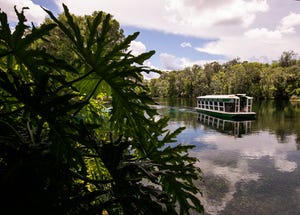 Florida’s springs and wetlands have long been known as places of natural beauty and cultural relevance, but did you know they also played a pivotal role in the development of two novel scientific fields? Gainesville and the University of Florida hold a premier place in the history of environmental science and environmental engineering because UF was the first and last academic home of the brilliant scientist Howard T. Odum.

After earning a Ph.D. in zoology from Yale in 1950, Odum chose to start his academic career at UF. Born and raised in Chapel Hill, North Carolina, “H.T.” had a passion for birds and the environment from a young age. Florida’s diverse and abundant wildlife, natural wetlands and other exotic aquatic habitats appealed to his sense of adventure and curiosity, and it was here that he initiated his 50-year pursuit of knowledge about how the world works.

Unique among ecologists at the time, Odum believed that it was critical to understand the role of humans in shaping our natural world. His first scientific accomplishment was a four-year study of Silver Springs, Florida’s largest and most visited spring.

Working with more than 20 collaborators, Odum’s team described and quantified all the levels of nature’s organization — the flows of energy and materials — from the tiniest algae, through the wildlife food web, all of the way up to the thousands of tourists in glass-bottom boats and their effects on the springs. Published in 1957, Odum’s Silver River research revolutionized the way scientists think about ecosystems; 65 years later, it’s still the gold standard in ecosystem ecology.

Odum’s work at Silver Springs and Silver River became the basis for systems ecology, an innovative new academic field seeking to understand the interactions between the natural and human-built worlds. Odum trained an international generation of “systems thinkers” to consider both quantitative and qualitative understandings of the natural world, including people.

In the early 1970s, Odum pioneered research on the use of natural wetlands for the treatment and recycling of wastewater, initiating groundbreaking research in the fields of wetland restoration, creation and management that continues today.

In the early 1970s, Odum pioneered research on the use of natural wetlands for the treatment and recycling of wastewater, initiating groundbreaking research in the fields of wetland restoration, creation and management that continues today.

Odum’s studies in Florida’s springs and wetlands spawned two local scientific and education organizations that share his name. The Howard T. Odum Center for Wetlands (cfw.essie.ufl.edu) was established at UF in 1973. The Howard T. Odum Florida Springs Institute, based in High Springs (floridaspringsinstitute.org), was founded in 2010 as an educational non-profit. Both organizations pay tribute to the foresight of a brilliant scientist who anticipated the challenges of an expanding human population and energy consumption in a finite world.