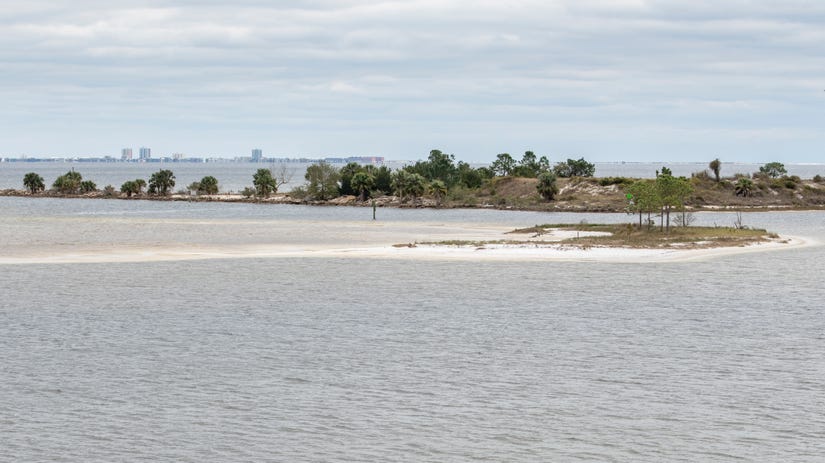 A natural shoreline erosion project coming to a small island off Naval Air Station Pensacola could become a catalyst for a swath of similar projects aimed at protecting Escambia and Santa Rosa counties’ shores from the type of damage sustained during Hurricane Sally.

The White Island living shoreline project was recently greenlighted for a $9 million grant from the National Fish and Wildlife Foundation’s Gulf Environmental Benefit Fund to allow for construction for the years-in-the-making erosion control endeavor.

It will see limestone formed around the water’s edge both underwater and above, to act as a kind of break for strong waves, and experts believe it also could help recruit oysters, barnacles and shellfish to the area. The restoration project crew will construct about 45 acres of marsh, 15 acres of beach habitat and 10 acres of habitat for underwater vegetation.

“The intent of projects like White Island are to restore and stabilize vulnerable coastal shorelines by using nature to do that protection,” Gulf Environmental Benefit Fund Senior Vice President Tom Kelsch said. “In this case, the project involves restoring beach, coastal marsh, oyster reefs and using those natural habitats to reduce waves and storm surge, and to stabilize shoreline that would otherwise be eroding.”

Living shorelines have become a popular subject among conservationists and resilience planners in recent years for their win-win ability to both protect communities from erosion and storm impacts and to provide a habitat for flora and fisheries to flourish.

Escambia County RESTORE project manager Matt Posner said living shorelines are more cost-effective in the long term than such traditional management tools as riprap or bulkheads because they are less likely to be impacted by events such as storms and therefore don’t often need replacing.