Gulf of Mexico
Holmes Beach is considering revising its parking plan to include resident-only parking in a zone indicated in blue on the map. The yellow zone depicts areas where parking is unrestricted. Islander Courtesy Graphic 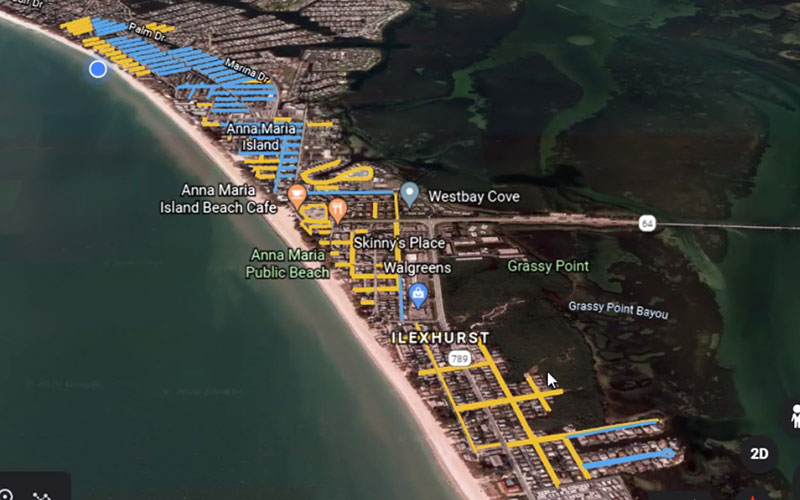 HOLMES BEACH — He said it was a “work in progress.” Now, progress is proceeding. When Holmes Beach Police Chief Bill Tokajer recommended the removal of about 1,100 on-street parking spaces in late April, commissioners agreed to the plan on Tokajer’s assurance it would be tweaked.

At a teleconferenced commission meeting June 23, Tokajer presented a draft ordinance for a “parking-by-permit-only zone.” If approved, residents and owners would obtain decals for parking 9 a.m.-5 p.m. in 619 of the 1,100 prohibited parking spots.

After 5 p.m., parking in the zone would open to the public.

“We do not think that our sunset crowd is our concern,” he said. “Plus, if you have a dinner party at your house, chances are that would be after 5 p.m.”

Tokajer’s effort to inventory and remove on-street parking was made at the behest of Mayor Judy Titsworth in the wake of coronavirus closures.

The move was meant to reduce congestion and trash near neighborhood beach accesses.

However, people from on and off the island were divided over the decision, which limited parking near publicly funded beaches and, some said, pushed traffic into Bradenton Beach and Anna Maria.

In letters to officials and on social media, some people complained the decision was made too quickly, with little input, while others commended the city action.