Southeast
Liv Williamson, a coral researcher, holds a baby coral that was engineered to be more reslient to climate change at the Coral Reef Futures Lab at the University of Miami Rosenstiel School of Marine and Atmospheric Science in Virginia Key. MATIAS J. OCNER / MIAMI HERALD 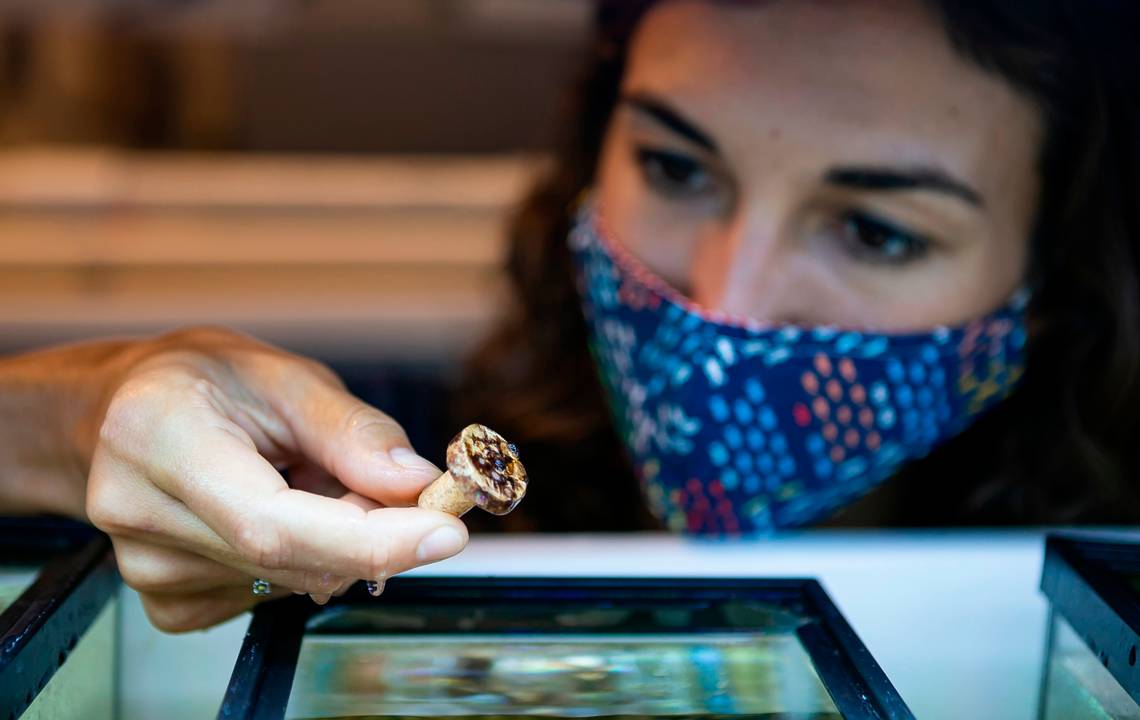 During a scouting mission to check on coral colonies in inshore Biscayne Bay last year, Caroline Dennison and a few other marine biology graduate students found something astounding: healthy populations of brain corals.

There were no signs of white spots or bleaching and the vivid yellowish brown colors indicated that the corals were untouched by yet another mysterious disease that’s ravaging reefs along the Florida coast. Even more extraordinary was that these corals were thriving in shallow and warm water right off the seawall at Bill Baggs Cape Florida State Park, near a bustling seaside metropolis.

“That was pretty amazing because you wouldn’t imagine that type of coral living successfully in a foot of water, at that location, considering all the issues affecting reefs in the area,” said Dennison, a coral researcher at the University of Miami Rosenstiel School of Marine and Atmospheric Science. “It was just astonishing, I couldn’t believe it.”

What’s protecting these corals? The discovery has opened up a world of research possibilities on what’s killing Florida reefs and the water quality problems making it harder for corals to survive in troubled Biscayne Bay.

Dennison is hoping the thriving colonies will shed some light on a myriad of threats to corals: from the impact of rising temperatures and nutrient pollution on reefs to the relationship between corals and the algae that live within them. Findings could also help scientists develop new coral restoration strategies to replenish this key natural protection infrastructure for coastlines against erosion and storms.

The surprisingly good shape of the nearshore corals also highlighted Biscayne Bay’s diverse ecosystem, which has pockets of healthy habitats. Not far from these corals, or an artificial reef right next to Port Miami, is the Coral City Camera, which livestreams a constant parade of colorful fish, manatees and sharks near a channel used by huge cruise ships.

The sight of thousands of fish carcasses floating in the northern part of the bay and the algae blooms that followed alarmed residents and triggered a reckoning over critical issues plaguing Miami-Dade’s treasured turquoise waters: contamination from crumbling sewage pipes and failing septic tanks, stormwater runoff and a seagrass dieoff that’s drastically reducing the bay’s ability to handle pollution and regenerate.