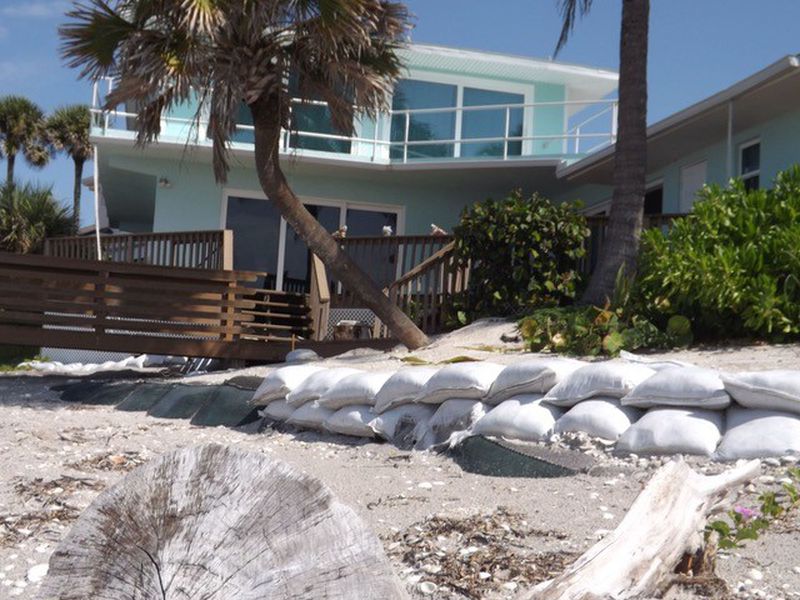 Sand is a precious commodity on the Gulf of Mexico’s Manasota Key. Just ask beachfront homeowners.

Laura and Richard Klinski have spent their winters on the Charlotte County key since 1979 and can remember, even three years ago, being able to walk the beach for up to a mile into Sarasota County. That's impossible now.

The beach is nearly gone.

Stairs and boardwalks that led to the beach are left hanging over the Gulf of Mexico's churning water.

"We live here, we love it, but we're just afraid."

Homeowner Harry Artz is one who urged county commissioners to do something long ago.

"It used to take years for us to see the changes," Laura Klinski told Sun writer Steve Reilly last fall. "But now, it's happening daily."

"Two weeks ago, it took two or three more feet," Richard said. "A week later, three or four feet came in, the next day another foot of sand came up, but then a few days ago, it went down five or six feet."

The eroding shoreline has caused headaches and fears of losing property value to residents along the beach for years. Hurricanes that threatened, but never came ashore, and tropical storms sped up the loss of sand. But the reasons for a disappearing beach can't be easily explained.

Michael Poff, of Coastal Engineering, said while the main driver of erosion is cold fronts in the winter and storms in the summer, he can't rule out the rise in sea level like that seen on Florida's East Coast and elsewhere.