Southeast
A woman walks in floodwater in Miami on May 26, 2020. (Chandan Khanna / AFP via Getty Images) 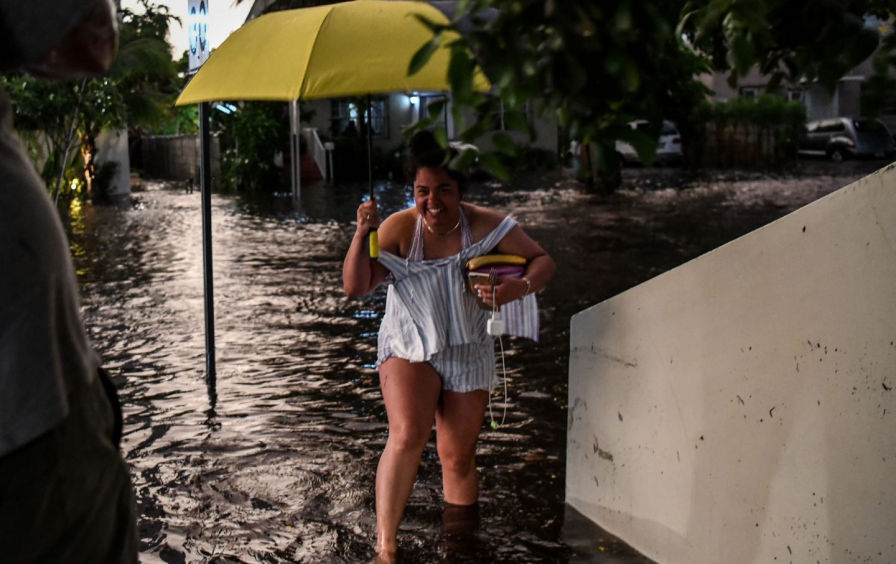 With sea levels rising, Miami will be underwater by the end of the century.

Florida’s time of climate change denial is over. You can buy mugs in Miami Beach souvenir shops that show a map of the world. Pour in a hot liquid, and Florida disappears. “Climate change is real” appears on the sides of Miami’s buses, and the issue is well covered in the local press; TheMiami Herald appointed a special climate change reporter in 2017. Florida’s Republican governor, former climate skeptic Ron DeSantis, last year recruited scientists and “resilience consultants” to prepare the state for climate impacts.

The sea level here has risen by 2.8 inches since 1992, but the rate of increase has accelerated in the past 15 years and it could rise another 2.8 feet by 2060. And, for once, millionaires in their beachfront homes in Miami Beach or nearby Fisher Island, Star Island, and Indian Creek are not exempt from loss. Even President Donald Trump’s property is likely to feel the effects: By 2050, Mar-a-Lago, his private Palm Beach club north of Miami, is predicted to be under a foot of water for 210 days a year.

Miami is not viewing climate change just as a future threat; its effects are already part of daily life. Florida, former swampland that is just above sea level, is the US state at greatest risk from increasingly regular floods. The sea is rising faster here than anywhere else, and “king tides,” huge surges in autumn, are especially destructive. Drain outlets are below high-tide level during the surges, so salt water enters the drainage system and bubbles up from storm drains, submerging roads and underground parking lots for days. In 2016 a photograph of an octopus washed up in a Miami Beach car park gained widespread attention. This recent surge phenomenon is called “sunny day flooding,” because it happens even when there is no rain. In some parts of the Florida Keys, the archipelago south of Miami, the 2019 floods lasted an unprecedented 90 days.