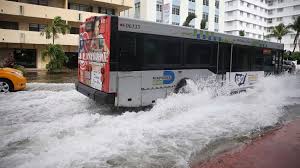 After years of mostly ignoring climate change, Florida lawmakers waded deeper into the matter on Tuesday , advancing a proposal that would create a statewide Office of Resiliency and establish a task force to begin looking into how best to protect the state’s 1350 miles (2,173 kilometers) of coastline from rising oceans.

By
My Northwest
Section:
Federal
Region:
Southeast
Gulf of Mexico

It’s a marked change from just a few years ago, when the issue of climate change couldn’t get any traction in Florida’s Republican-run Capitol under then-Gov. Rick Scott, who is now a U.S. Senator.

But with Gov. Ron DeSantis exerting political muscle behind the effort, environmentalists see an opportunity to begin addressing the problem, even if they say the current legislative proposals fall short of a comprehensive response to climate change.

“We’ve seen bills that will help communities plan for rising sea levels — all of which is very, very important, and we need to do that — but without focusing on the cause of the problem, it just seems kind of lackluster. It’s not addressing the full problem,” said Jonathan Scott Webber, the deputy director of Florida Conservation Voters.