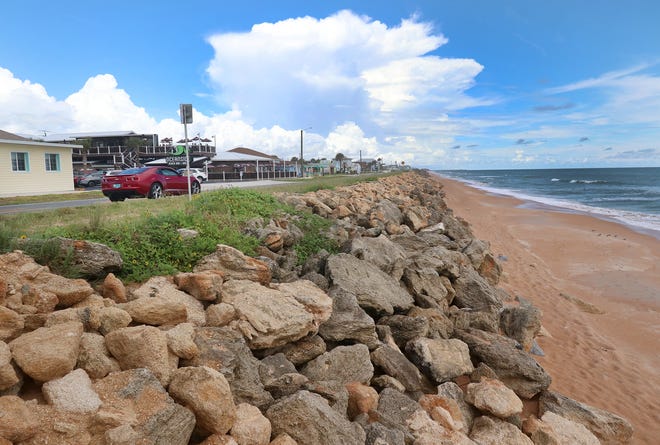 FLAGLER BEACH — Flagler County commissioners Wednesday unanimously approved filing for eminent domain against one property owner in an effort to save the $25 million dune restoration project.

“There’s an owner that owns two remnant parcels in the middle of the project that would prevent the Army Corps of Engineers from going forward,” said Al Hadeed, Flagler County attorney. “It is a risk to the integrity of the project to have those breach points."

The 2.6-mile fortification project requires property owners with a parcel east of State Road A1A from South 6th Street to South 28th Street to provide easements to the federal, state and local agencies involved so they can add sand and natural vegetation to build up the dunes.

According to the county’s Shore up the Shore website, the project will reconstruct the eroded dune to extend approximately 10 feet seaward of its present location, and then gently slope down to the surf, extending into the ocean to lengthen the beach.

County Administrator Jerry Cameron asked the board during Wednesday's County Commission meeting to authorize the filing of eminent domain against the property owner for her two remnants.

"This is something that I have considered for some time and it has to do with the dunes," said Cameron. "We have reached a situation where we've got two lots that are held out that are in the middle of this project. The situation is that this one landowner is literally jeopardizing an entire city. If we get the right kind of storm and we have a breach it will take out a large part of Flagler Beach."

Hadeed said the board didn’t want to go this route but felt it had no other choice.

“The board said that they did not like the idea of filing eminent domain," said Hadeed. "This would not be something that they would consider, but given that the entire project is being held up because of these two remnants, they didn’t see any other choice."