Southeast
There are no dunes left along most of the county’s beaches. Flagler County government is preparing for another “band-aid,” in its chief engineer’s description. (© FlaglerLive) 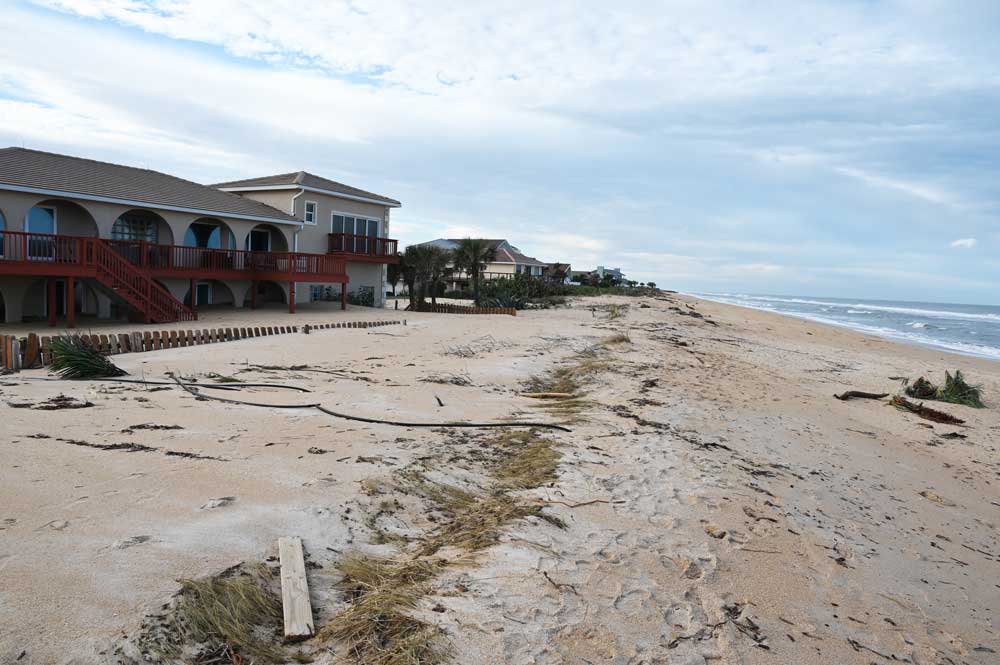 Weeks after approving $5 million in emergency spending for sand-dumping along its critically eroded shore, the Flagler County Commission today approved an additional $3.6 million, with the possibility of yet another $3.8 million ahead, for a total of $12.4 million in emergency-sand projects so far.

The county expects a total of $14 million in emergency sand between money already appropriated or pledged, and money it expects to get in coming weeks from state and federal sources. The county has applied for $18 million on top of that from the Federal Emergency Management Administration, but the fate of that application is uncertain for now.

The sands with approved money will be used to rebuild only six miles of Flagler County’s dune-less 18-mile shoreline (11.4 miles of which in unincorporated Flagler County). The millions of dollars will rebuild the same kind of narrow, emergency dunes that the county rebuilt in the aftermath of Hurricanes Matthew and Irma, in 2018–sands that, by last year, had entirely washed away. The county had secured some $20 million in state dollars for that, $20 million that literally washed away. For almost three years, however, the sacrificial dunes did their job, keeping the mainland from being impacted.

This round of sand would do the same, with the understanding that it is no less of a temporary measure than the previous round.

“Everything we do here is only six cubic yards, we are doing another band-aid project, we are not doing resilient,  long-term project,” County Engineer Faith al-Khatib said this morning, fully aware of the temporary nature of the work in an environment where massive erosion from rising seas is now routine, even after common storms and high tides. There will be a plan for bigger, more durable dunes, al-Khatib said. “When we get to that point,” she told county commissioners, “we’ll come up with a plan to you and one day we have to match some of that funding.”

Al-Khatib’s message to county commissioners was clear, though so far the commission has not been willing to hear it without at least some wax in its ears: to get beyond the band-aid approach, it’ll likely cost millions in local dollars. On the other hand, al-Khatib herself is to blame for the commission’s resistance to ponying up local dollars: al-Khatib and her team have been so successful at securing state and federal dollars that she’s gotten the commission used to the gravy train.