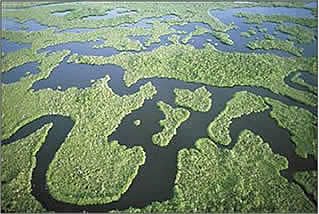 FL - Everglades Restoration to 'Get the Water Right' Estimated at $7.4 Billion Through 2030

MIAMI — Everglades restoration projects will require about $7.4 billion over the next 10 years, compared with $6 billion spent through 2019, the U.S. Army Corps of Engineers said while presenting a draft of its work schedule.

The estimated cost for 2020-30 is what has been authorized for construction, and doesn't include other projects that are currently waiting for authorization, said Eva Velez, a Corps project manager who oversees the integrated delivery schedule of Everglades restoration projects. Under the schedule presented this week, the federal and state governments will need to spend about a billion dollars every year through 2026.

She said the Corps is also counting on Congress speeding up delayed projects by passing water resources and infrastructure bills every two years, as it has done since 2014.

When Everglades restoration was authorized in 2000, its goal of 68 original projects was based on the idea that Congress would approve such bills every two years, but no bills passed between 2007 and 2014, stalling some of the work.

"We are ready to go, we have big work to do with lots of investments, but in order to keep it going we also need the bills to pass so that we can keep the hopper full and keep making progress," Velez said during a presentation of the draft schedule as it stands in 2020 to federal and state agencies.

The projects include a massive reservoir approved by Congress in 2018 that's being built just south of Lake Okeechobee to clean polluted water before it reaches the Everglades.