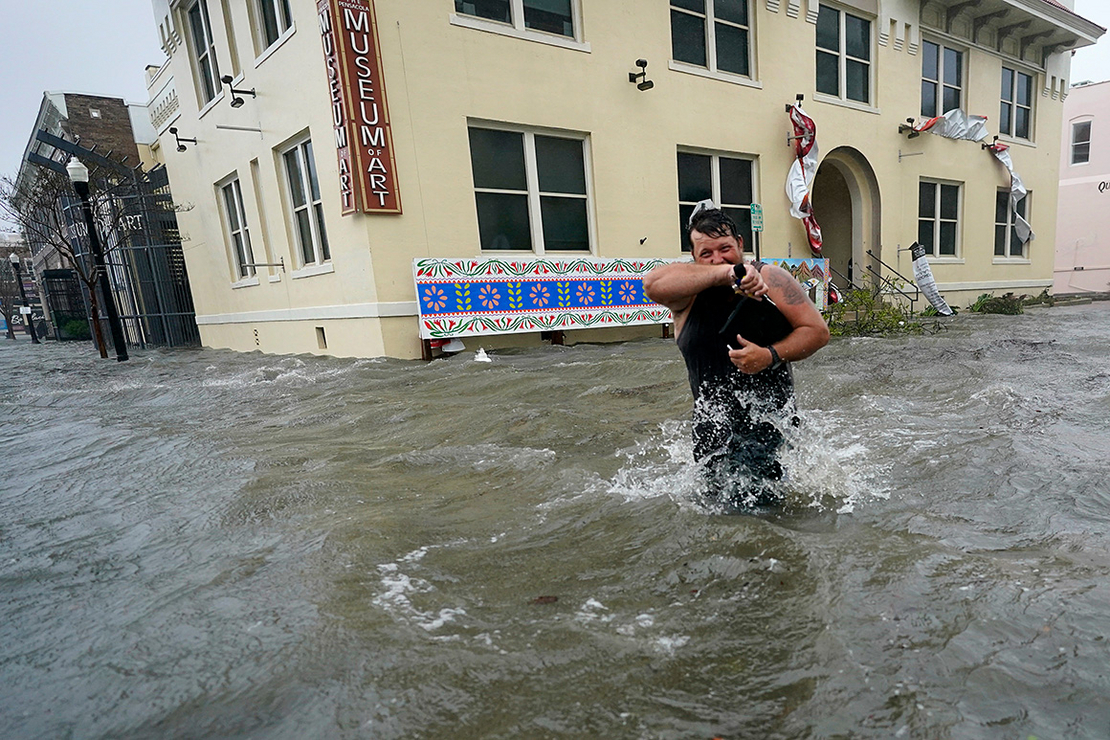 FL - Drowning in dirt: How homebuilders are making floods worse

The soul of this Florida Panhandle city lives in the Tanyard, a 200-year-old neighborhood so steeped in history that locals give it an extra capital “T” — as in “The Tanyard.”

PENSACOLA, Fla. — The soul of this Florida Panhandle city lives in the Tanyard, a 200-year-old neighborhood so steeped in history that locals give it an extra capital “T” — as in “The Tanyard.”

Yet its latest challenge is like none before. The Tanyard is at risk of drowning — if not by flood then by fill dirt.

The flood risk is tied to global warming. The Tanyard occupies some of the lowest ground in a city that has been hit by nine hurricanes since 1975, most recently Sally in 2020. Looking forward, rising seas could swell nearby Pensacola Bay by 12 inches in less than 30 years — meaning a 6-foot storm surge would put the entire Tanyard underwater, according to modeling from ClimateCheck, an analytics firm, for E&E News.

Its first waves already are being felt as 15-ton dump trucks ply the Tanyard’s streets to deliver loads of fill dirt to freshly cleared construction sites. Elected officials and like-minded developers envision a revived neighborhood of nearly 2,000 new residential units replete with green space, bike paths and other amenities — all within walking distance of downtown and Pensacola Bay.

When graded and packed, the fill material becomes elevated lots on which developers can build “flood-proofed” single and multifamily homes. These fill-and-build houses are popping up like palmettos in the Tanyard, fetching upward of a half-million dollars from house hunters looking to buy near the bay.

Environmentalists, who describe the elevated lots as “fill and build,” warn the practice is more dangerous than it looks. They say stormwater running off the higher lots inundates neighboring homes and streets — effectively raising a community’s flood risk and putting longtime residents at even greater peril from hurricanes and extreme storms.

“A lot of people are angry. They’re going to flood us all out of here,” said Marilynn Wiggins, president of the Tanyard Community Neighborhood Association. The group, formed in 2005, has rallied against new development they say is eroding the neighborhood’s historic character and compromising flood security for longstanding residents.

Wiggins, who lives in the home her parents bought in the 1950s, has seen firsthand the destruction a flood can bring to the neighborhood. When Hurricane Sally, bearing 120-mph winds and a 6-foot storm surge, battered Pensacola in 2020, she said water rose above her elevated front porch.

“Nobody should be forced to move out of the place where they’ve lived their whole lives,” she said.

Pensacola is just one example of how “fill and build” has become a vehicle for homebuilders to develop older waterfront neighborhoods and once undesirable lowlands near rivers and oceans — often at great risk to residents who have lived for years in those communities. The trend is evident in Texas and other Gulf Coast states, as well as in South Florida and up the Atlantic coast. In some places, fill and build is viewed as a climate adaptation strategy.

But critics call it a case study in “maladaptation,” where actions to mitigate climate change impacts for some people increase vulnerability for others.

“Fill and build is not a solution to anything. Fill and build is the problem,” said Steve Emerman, a hydrologist and consultant to the Anthropocene Alliance, a coalition of small community organizations fighting the practice in Pensacola and elsewhere.

Yet one challenge is identifying what exactly “fill and build” entails — as the concept can mean different things in different places.

A single fill-and-build lot in a rural or low-density area often stands out. Its plateau-like dirt foundation offers a stark visual contrast to surrounding low-lying areas. For larger projects, such as apartments and subdivisions, fill dirt can extend across dozens of acres — effectively creating an island on which a neighborhood can be platted.

One South Carolina developer called it “an epithet used by environmentalists” to tie up development proposals they don’t like. But environmentalists aren’t the only ones concerned about the widespread use of fill in floodplains.