Southeast
Hurricanes Ian and Nicole left only a sliver of sand between the high-tide waterline and State Road A1A at the south end of Flagler County. many other parts of A1A suffered the same fate. The state Department of Transportation has been rebuilding protections with rock revetments and sand. (© FlaglerLive) 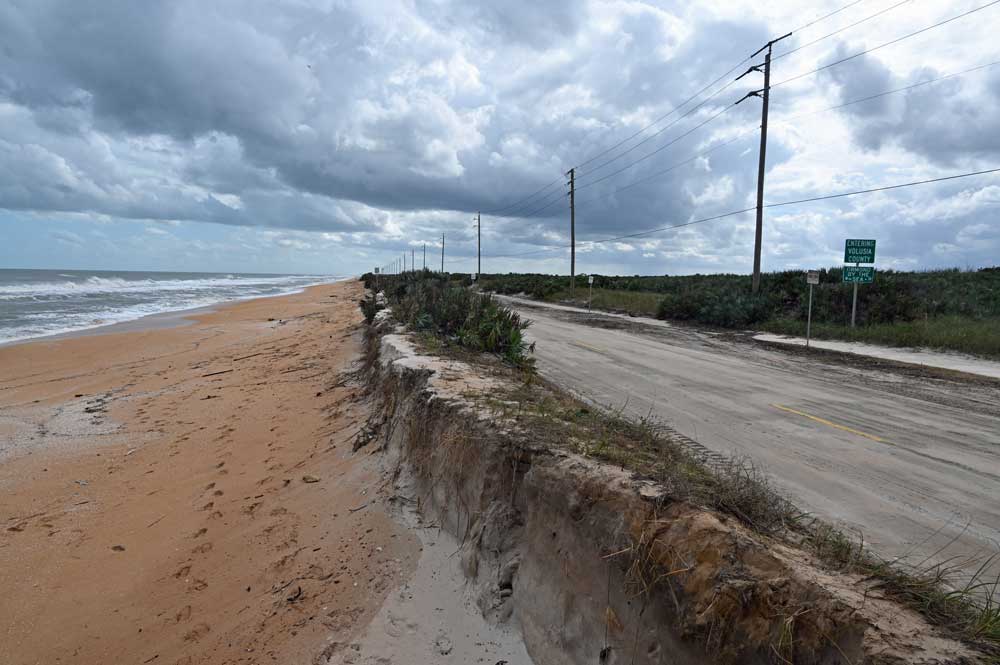 FL -DOT Will Seek Public Input on More Permanent Protection for A1A, But Options Are Limited

After two months of closed-door sessions involving state, federal and local officials on how to more permanently secure State Road A1A in Flagler and Volusia counties from storm damage and rising seas, the Florida Department of Transportation will seek public input in two sessions later this month–one in Flagler Beach, one in Volusia County.

Input will be framed by a half-dozen proposals presented by DOT, focusing on a range of possibilities for a 13-mile stretch of road, from Volusia County to Beverly Beach. Options are limited. The department is not attempting to reinvent the wheel, only to keep wheels trundling along one of the nation’s last remaining highways with direct frontage on the Atlantic ocean without having to rebuild the road every three years.

Those options have been narrowing as sea levels have been rising and even routine storms such as nor’easters and major tide events have been inflicting damage to the shoreline. Options range from building more sea walls to dumping stronger rock revetments to engaging in recurring but very expensive beach renourishment, to combinations of all three. Beyond that, there are no viable alternatives.

Unlike proposals in the wake of Hurricane Matthew’s destruction of A1A, there appears to be no proposal to move or realign A1A, an option that has always drawn intense public opposition. DOT after Matthew had proposed moving A1A to Central Avenue in Flagler Beach.

There will be only two such “listening sessions,” as DOT is calling them. The first is scheduled for Jan. 19 at Ormond Memorial Art Museum and Gardens. The second will be on Jan. 24 at Santa Maria del Mar Catholic Church Parish Hall in Flagler Beach. Both will be at 7 p.m.

Whether the department is genuinely seeking public input or merely going through the motions of giving the appearance of listening is open to question. The department has customarily kept the development of its proposals close to the vest, involving the public only to a limited degree before going ahead with plans that may have been in the pipeline regardless.

The department spent more than $27 million repairing A1A in Flagler Beach, and building a sea wall at the north end of town, in the aftermath of Hurricane Matthew–not including the $20 million the county secured in state tax dollars to dump a thin ribbon of dunes on 11 miles of beach north of the city.

That ribbon had vanished well ahead of last year’s hurricanes. By the time Nicole had passed through the region, A1A was again in tatters in many parts in Flagler Beach and south into Volusia County. The Department of Transportation began emergency repairs during Nicole’s final throes, and eventually dumped over 24,000 cubic yards of sand and 17,000 tons of coquina and granite rocks just from South 7th Street in Flagler Beach to High Bridge Road in Ormond Beach.