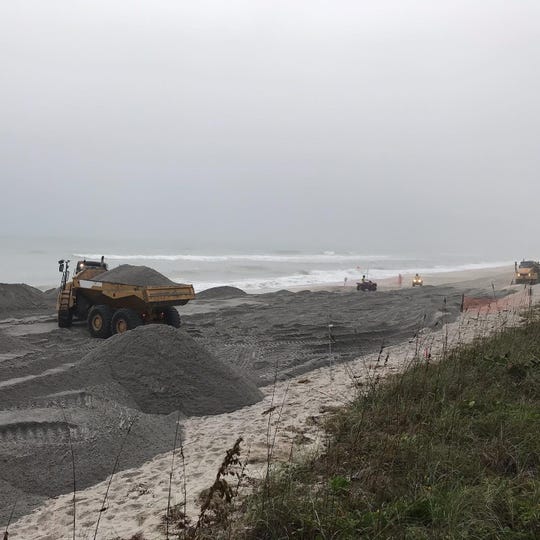 What looks like dirt now will soon turn a lighter shade of gray. Brevard County officials assured residents that's the case with the new sand trucks are spreading this week in the southernmost mile of the so-called Mid Reach, between Flug Avenue and Poinsetta Street, in unincorporated Indialantic.

It just needs its time in the sun.

The sand comes from the same place it did when Cocoa Beach and Indialantic shores were widened in recent years: an area about five miles off Cape Canaveral, called Canaveral Shoals.

The county's contractor tests the sand daily to make sure it's the proper grain size and color and has the appropriate carbonate content, Mike McGarry, the county's beach renourishment coordinator, said Thursday via email.

The sand appears darker because it's been on the ocean floor for years, McGarry said, and not lightened by the sun and the mixing in with the native beach sand.

"The darkness is not organic material," McGarry added, "but in my observation, tiny bits of black seashell, mixed with the lighter sand grains."

Dutra Dredging — the same contractor dredging the sand and constructing the wider beaches in Satellite Beach and Indian Harbour Beach — samples the sand daily to visually inspect for grain size, silt content and color, McGarry said. The samples are saved for the U.S. Army Corps of Engineers, the federal agency that permitted the project.