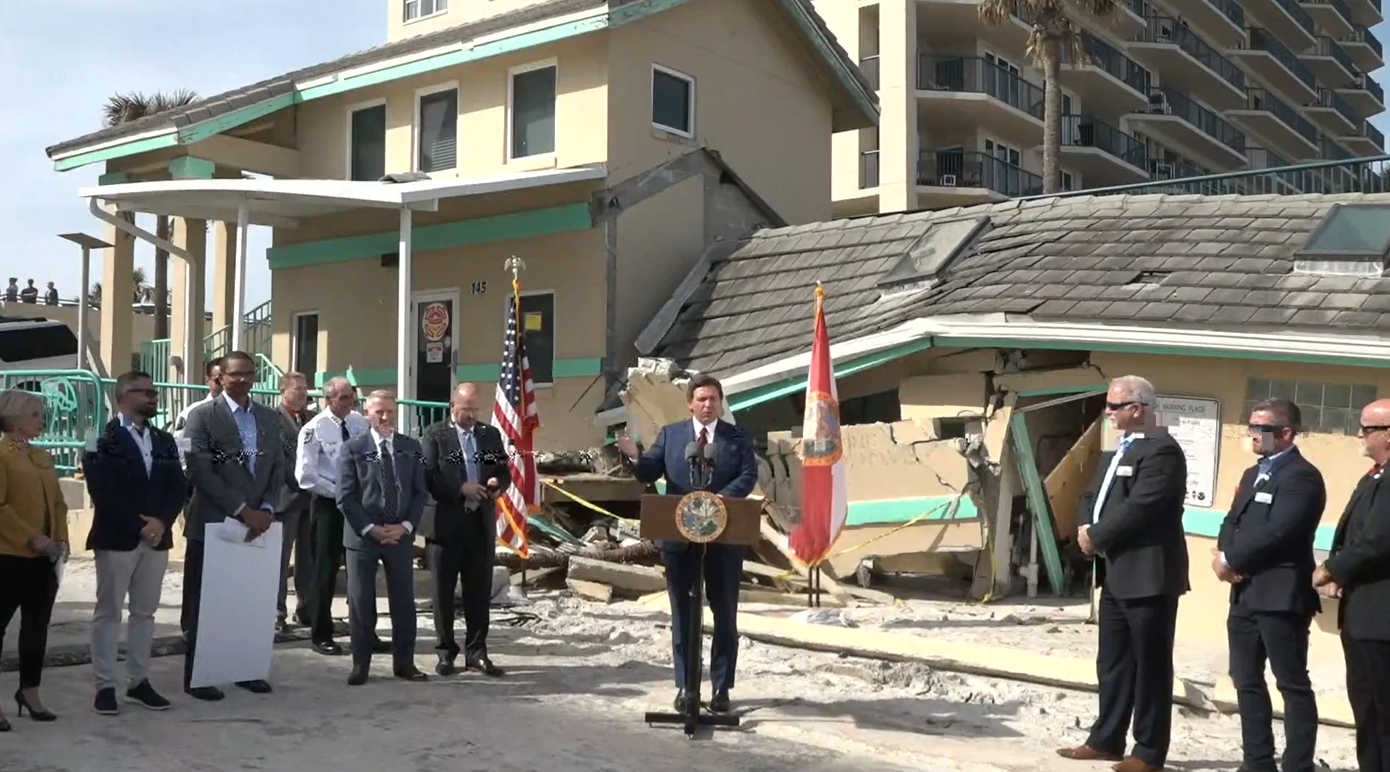 Gov. Ron DeSantis on Wednesday warned that it’s too soon to expect the property insurance reforms the Legislature passed last month to result in lower rates or increased availability of coverage.

“It’s going to take a little while longer before you see [results] — but I think the response has been very positive,” DeSantis said in answer to a question during a news conference in Daytona Beach.

The governor was there to distribute $100 million to restore beaches that suffered major erosion during hurricanes Ian and Nicole, both of which damaged coastal communities in Florida late last year. Both the beach money and insurance reforms were the product of a special session held in December.

The $100 million was part of legislation authorizing $250 million in disaster recovery following Ian and Nicole. The DeSantis administration is distributing the money between 16 counties, with Volusia’s share set at nearly $37.7 million.

The property insurance reforms were a response to a tanking property insurance market and took principal aim at the trial attorneys who represent policyholders in claims disputes with carriers; the insurers, along with much of the rest of the business community and even state regulators, blamed excessive litigation for driving up the costs of coverage.

The reforms limit lawyers’ ability to force carriers to pay clients’ legal fees even if they prevail in litigation, making these lawsuits less attractive financially to attorneys.

The reforms also made $1 billion in reinsurance coverage available to carriers, on top of $2 billion provided earlier last year. Carriers rely on reinsurance to back claims in the event of a catastrophe, but the market got tight largely because of international capital trends; reinsurance costs grew by more than 50 percent between 2019 and 2021, according to the Florida Office of Insurance Regulation.

Carriers can’t operate in Florida unless they can secure specific levels of reinsurance coverage, and a number of companies consequently left the market, increasing pressure on the state’s insurer of last resort: Citizens Property Insurance Corp.

The reforms, then, were designed not to bring immediate relief but rather to allow the industry to operate at all.

“So, it’s all really about trying to attract more private investment into Florida, more policies being offered. Because if you dump everyone on Citizens, that will go belly up. And that will cost people a lot of money. And that is not the way to do it,” DeSantis said Wednesday.

“I think everyone who’s acknowledged, has looked at this, said Florida’s more attractive today than it was, you know, a month and a half ago. And that’s good, but I do think it takes some time to percolate. We may need to do other things in the regular session. And we’ll be standing by, and we’ll be ready to do it.”

Ian hit in Southwest Florida on Sept. 28, crossed the peninsula, and moved out to sea over the Treasure Coast before causing significant damage in the Carolinas. Nicole hit near Vero Beach on Nov. 10 then Cedar Key and ultimately moved over the Panhandle as a tropical depression.

In addition to the storm surge and flooding from precipitation in Southwest and Central Florida, Ian undermined coastal structures along the Atlantic coast. DeSantis’ backdrop during his news conference were the ruins of a portion of a midrise seafront residential development.

“This erosion was worse than what they had in Southwest Florida. They had serious problems there — don’t get me wrong. But this has been kind of that one-two punch with the two storms,” DeSantis said.