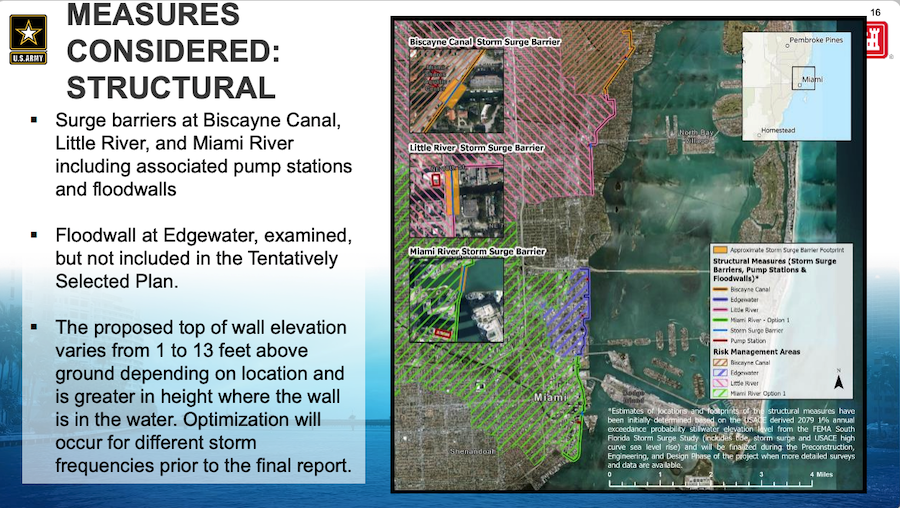 A $4.6-billion U.S. Army Corps of Engineers proposal to protect Miami from future storm surge, largely by building massive sea walls and elevating infrastructure systems, is the latest of such plans the agency has developed for East Coast communities.

On June 5, the Corps unveiled a draft of the Miami-Dade Back Bay Coastal Storm Risk Management Feasibility Study, including its proposed plan to protect the most vulnerable parts of the region, and held virtual public hearings on the study June 9 and June 11. The Corps is also developing similar programs for Charleston, S.C., and the Florida Keys.

The protection plan calls for six miles of sea walls, ranging in height from 1 ft to 13 ft, plus elevation and protection of critical infrastructure and thousands of homes. Under the proposal, levees would be built along the Miami and Little rivers and Edgewater neighborhood, while levees and floodwalls are proposed around the Biscayne Canal. Total design and construction costs are estimated to be about $1.22 billion, according to the Corps proposal.

Carpenter says the walls were the most economically efficient way of protecting the areas and its critical infrastructure. But, she expects public feedback and continued study and modeling will yield further refinements to the plan. “Even after we move into the design phase and we do more detailed modeling, things will continue to evolve," she adds.

The proposal would require Congressional authorization and would not begin construction for at least five years. Even if the plan comes to fruition, it is only designed to block surge from a 100-year storm event by 2079 because of the cost of adding extra protections. The Corps is planning for an extra 3 ft of sea level rise by then.

The plan does not address sunny day flooding—high-tide events that flood streets and other low-lying areas—which is becoming more frequent in areas along the East Coast.