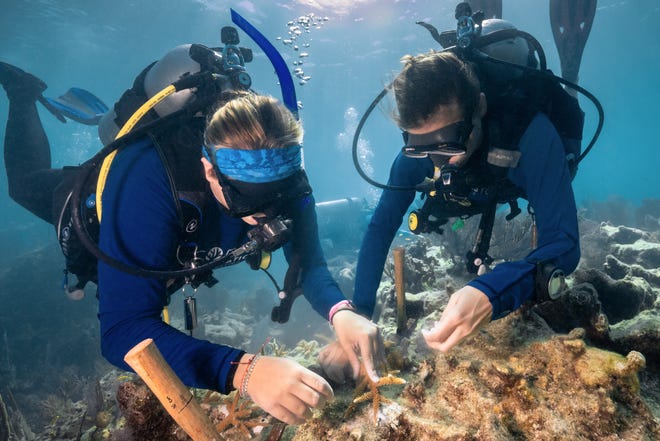 The week surrounding Earth Day 2021 was a good one for proponents of saving coral reefs both off the shores of the Florida Keys and around the world.

They unveiled the first phase of that 20-year mission – planting 60,000 pieces of elkhorn and staghorn coral over a nine-acre area in Eastern Dry Rocks, one of the seven iconic reefs.

Crosby and Mote – the nonprofit research organization that shepherded the process of microfragmentation to speed reef restoration – appeared both on Good Morning America and in the May issue of National Geographic.

That issue, dubbed “The Ocean Issue,” featured “The Secrets of Whales” on its cover but dedicated 20 pages – including a four-page gatefold graphic – to “Rescuing Reefs.”

The Geographic piece opened on a hopeful note – with the underwater shouts of jubilation from Dr. Hanna Koch, a postdoctoral research fellow at Mote, and her colleagues, as they witnessed lab-grown mountainous star coral spawn in August 2020.