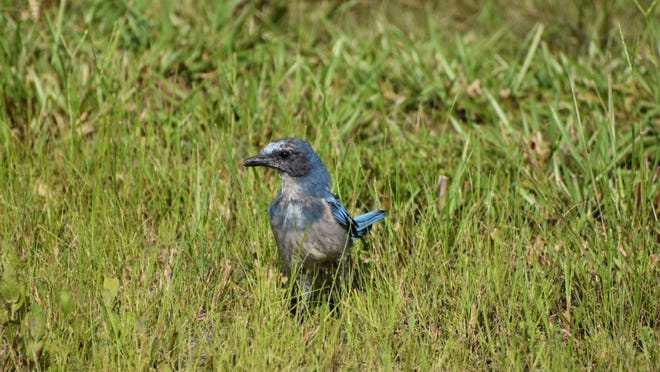 NORTH PORT – The Environmental Conservancy of North Port was successful in its bid to buy two lots from Sarasota County as habitat for Florida scrub jays and other wildlife.

“We’ve confirmed that on one of the two lots we’ve bought there is an active gopher tortoise burrow, and there are northern quail right there in that vicinity we’ve seen coming and going around that lot,” said Barbara Lockhart, president of the conservancy, which has expanded its mission from preserving land for scrub jays to include native species in general.

The Environmental Conservancy efforts are patterned after the nonprofit Cape Coral Friends of Wildlife, which preserves lots as habitat for gopher tortoises and burrowing owls.

The lots are in the neighborhood near Americana Avenue, between Duar Terrace and Ohio Road. That’s an area that environmentalists have eyed as potential scrub jay habitat.

“It’s the overall mission of flora and fauna; we just happened to start with the scrub jay area because those lots were up for auction, and we just threw caution to the wind to see what kind of feedback we’d get from the public,” Lockhart said. “We got a lot of feedback, and we got enough donations to buy them.”

The feedback Lockhart refers to came in direct donations at the nonprofit’s website ecnorthport.com/ and last spring through an agreement with North Port Friends of Wildlife, which participated in The Giving Challenge.