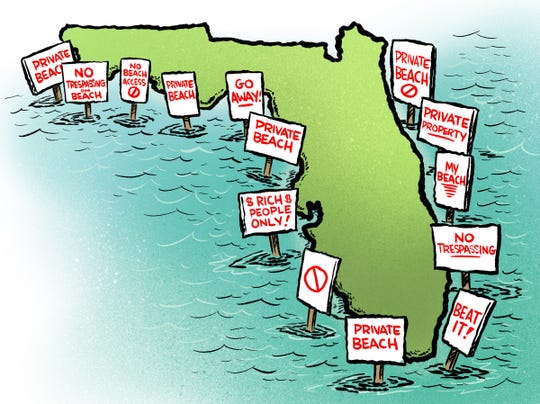 Beachfront property owners, aided by high-priced lobbyists, have stripped local governments’ power to oversee your ability to enjoy the beach.

In 2016, Walton County adopted a "customary use" ordinance, reorganizing the public’s long-time use of the coast for traditional fishing and recreation, while codifying the ability of residents and tourists to continue to do so.

Wealthy beachfront property owners, however, led by former Arkansas Gov. Mike Huckabee, rebelled. They lobbied the Legislature into passing House Bill 631, making it easy for beachfront owners to employ the courts to block the beach. Threatening signs, fences and security guards have been employed to block public beach use.

Similar efforts are being planned throughout the state. Indian River County for instance has been forced to file suit to establish public access to a large portion of its beach line, while beach blocking attempts are being looked at in Sarasota, Pinellas, Palmetto and elsewhere.

Panhandle Republican Rep. Jayer Williamson says his respect for private property rights would likely preclude him from supporting any effort to repeal HB 631. However, is it really private?