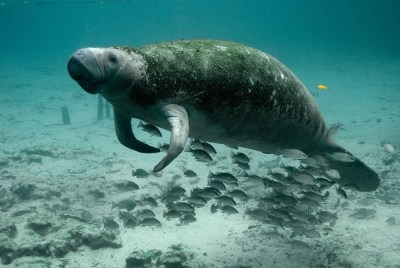 Conservation advocates in Florida are warning that 1,000 manatees in the state’s water could die this year—hundreds more than in recent years—due to starvation driven by water pollution, the climate crisis, and other man-made harms to the mammals’ ecosystem.

As The Guardian reported, 749 manatees died between January 1 and May 21, compared with 637 deaths in all of 2020, qualifying as an “unusual mortality event” according to the Florida Fish and Wildlife Conservation Commission (FWC).

Experts in the state point to the death of seagrass, manatees’ primary food source, including the majority of 80,000 acres of the plants in the Indian River Lagoon due to blue-green algae blooms—”which have themselves been caused by decades of human nutrient pollution from wastewater and runoff that continues unabated to this day,” Bob Graham, a former Democratic Florida governor and co-founder of Save the Manatee, wrote in the Tampa Bay Times last month.

Runoff containing fertilizers, microplastics, and other chemicals has been linked to the growth of blooms.

Warmer water temperatures linked to the climate crisis have also been known to foster the growth of algae, which cover the water’s surface and deprive sea grasses of sunlight. In response, manatees overgraze the remaining seagrass.

As The Guardian reported, toxic wastewater leaks into Tampa Bay from the Piney Point fertilizer plant in Manatee County, Florida has led to water-poisoning red tide algae blooms, with the FWC linking at least 12 manatee deaths to the algae.

A study by the Center for Biological Diversity (CBD) in March also found traces of pesticides in more than 55% of the manatees the group tested.

“Our beloved chubby sea cows are dodging boat strikes, reeling from red tide and starving in the Indian River Lagoon because of water pollution,” Jaclyn Lopez, Florida director for the CBD, told The Guardian. “It’s heartbreaking to add chronic glyphosate exposure to the list of factors threatening manatee survival.”

With just 7,500 manatees remaining, the unabated threats could mean the species is wiped out within a few years, as well as killing off other marine species and causing disaster for Florida’s beaches and tourism industry.

“Manatees are literally that sentinel species,” Patrick Rose, executive director of the Save the Manatee Club, told CNN. “They’re warning us of what else is going to come if we don’t do a better job while there’s still time to do something about it. If we don’t, our own lives will suffer.”

The Orlando Sentinel editorial board published a scathing editorial earlier this month, slamming policymakers for allowing manatees to die “at record sickening levels” this year.

“Our careless contempt for keeping Florida’s waters clean now has caught up with these gentle creatures. This isn’t just a coincidence,” the editors wrote, condemning state lawmakers as woefully out of touch with residents who want to save the state’s manatees and marine life:

The average Floridian has always respected wild surroundings and wants to protect the fragile parts, including its crystalline freshwater springs, its moss-draped woodlands and its rare animals.

The average state legislator, on the other hand, has always respected campaign contributions from wealthy polluters like phosphate mines and from developers whose goal is to cover sensitive land with subdivisions and golf courses that spew killing fertilizer into waterways.

Voters have said over and over again—loudly and unambiguously—that they want state money spent on the environment. Consider the 75% voter support for Amendment 1 in 2014.

The constitutional amendment ordered the state to use 33% of the proceeds—that was $750 million in 2015—of an already-existing real-estate tax called documentary stamps to improve and protect water resources and to buy preservation land.

Instead, then-state Sen. Alan Hays, R-Umatilla, now the Supervisor of Elections in Lake County, chaired a committee that hijacked all but $37 million to feed bloated state bureaucracy, pay off state debt and keep the corporate welfare flowing. That’s disgusting on two levels—the damage to the environment and the disrespect to the voters.

The editors also denounced former Gov. Rick Scott for “mercilessly slashing employees” from the Department of Environmental Protection, calling on the agency to loosen water quality rules, and barring local governments from regulating the use of harmful fertilizers.

“The reason sensitive manatees are dying is no big mystery,” they wrote. “Environmentalists heralded this foul die-off. Politicians were deaf to the warning. Florida has at least some rules for protecting land and animals, but has had almost no enforcement in the past decade. Dead manatees are just the beginning.”

Graham called on the Biden administration to “demand that the U.S. Fish and Wildlife Service (FWS) and other federal agencies make protecting manatees and recovering seagrasses and other submerged aquatic vegetation a top priority in ensuring that our aquatic ecosystems are nursed back to health,” following a 2019 decision by FWS to change manatees’ status from “endangered” to “threatened.”

“This is about more than just the environment,” De Freese told CNN. “It’s about human health, it’s about quality of life, it’s about the economic vitality of our coastal communities. And if we fail to act in a science-driven way to solve these problems, as the population grows, these problems will grow with it.”