Southeast
Savanna Berry, a regional specialized extension agent with the University of Florida IFAS Nature Coast Biological Station, talks about the sill, which is a barrier in the water that keeps the sand from eroding and allows sea life to use it as a home, during a shoreline restoration project on G Street in Cedar Key on Wednesday. Brad McClenny / Gainesville Sun 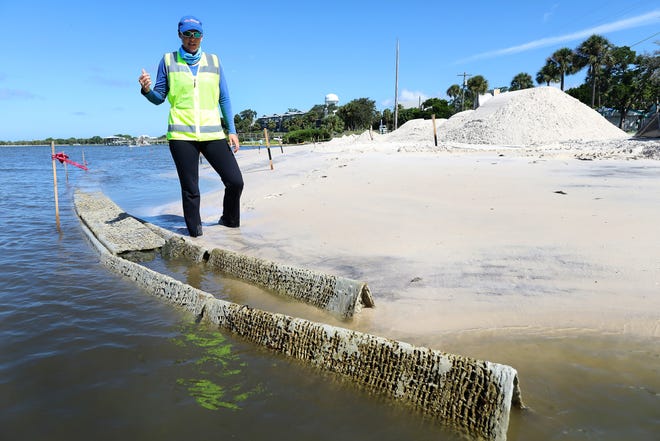 Anytime of the day is a good time on Cedar Key, but dusk is especially good.

Facing west, the horizon of the Gulf of Mexico is the end of the earth for the sun as it's setting, and G Street is a popular place on the island to watch the day close.

It’s about to get even better. A shoreline restoration project is underway on G Street and on Airport Road that uses a combination of structures and marsh grass to lessen the battering from storms.

“Living shorelines can reduce the energy and erosion and the chronic weakening of the shoreline, but they cannot reduce water levels,” Savanna Barry said. “In a storm surge they can definitely reduce the velocity and power of the water coming in. It won’t prevent flooding, but it may make flooding less damaging.”

Barry is a regional specialized agent with Sea Grant and the University of Florida’s Institute of Food and Agricultural Sciences. She is based at the IFAS Nature Coast Biological Station on Cedar Key.

The station is heading the project with money from the U.S. Environmental Protection Agency and a small grant from the Florida Fish and Wildlife Conservation Commission.

Lots of meetings were held in town to get ideas and thoughts from residents, not all of whom were on board.

Among the biggest supporters is Vice Mayor Sue Colson, whose family has been part of the historic aquaculture industry that is still vital to the island’s economy.

Colson, who served many years ago on the Suwannee River Water Management District Governing Board, said the success of an initial, smaller restoration project at Joe Rains Beach between G Street and Airport Road has sold most residents on the work.

“I’ve only waited 18 years for this,” Colson said. “It’s very satisfying personally. My grandchildren played (at G Street) every single day they were in this town, so that was a big personal victory. For the city, it’s a phenomenal victory.”