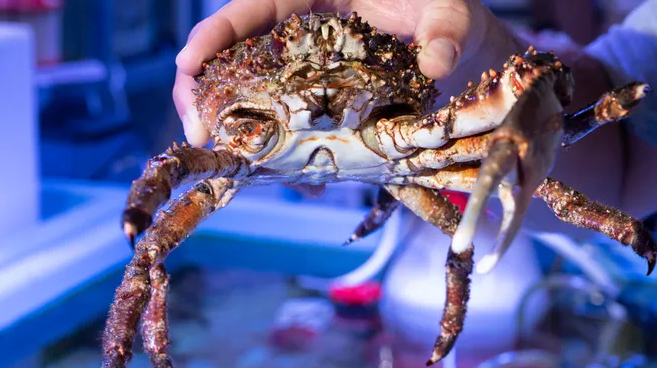 Before he was captured earlier this year, Big Red had already lost his left claw and a left rear leg,

At the Summerland Key lab, Big Red killed all the other males in the raceway where he resides, so he could mate with all the females.

“When they get to that size, they get territorial and they get antagonistic,” said Jason Spadaro, a postdoctoral scientist at Mote’s Summerland Key complex, which is also referred to as IC2R3.

Big Red’s offspring are seen as one of several keys to the success of Mission Iconic Reefs – a $100 million effort to restore coral at seven sites along the Florida Reef Tract, off the state's southern tip.

Related:Complicated quest to save coral reefs

Mote is one of seven entities enlisted by the National Oceanic and Atmospheric Administration – along with The Florida Aquarium, the Coral Restoration Foundation, Florida Department of Environmental Protection, Florida Fish and Wildlife Commission’s Fish and Wildlife Research Institute, Reef Renewal and The Nature Conservancy – to partner on the plan, unveiled in December 2019.

That three–phase plan has an ultimate goal of restoring 3 million square feet of coral reefs – roughly the size of 52 football fields.

That would increase coral coverage on those seven reefs – the Carysfort Reef Complex and Horseshoe Reef in the upper keys; Cheeca Rocks and Sombrero Key in the middle keys; and Looe Key, Newfound Harbor Patches and Eastern Dry Docks in the lower keys – from the current 2% to what is hoped to be 25% by 2035.

Much of that new coral is being cultivated in land-based nurseries and later planted on those seven sites, as well as other sections of the Florida Reef Tract.

In August 2020, lab-grown coral planted near the Newfound Harbor site spawned in the wild – proof that the coral can propagate on its own.

As part of the restoration process, nuisance algae  which retain sediment and choke off potential coral growth, must be removed.

That’s where Big Red – or rather his offspring – come in, said Spadaro, who had been assistant professor of marine science and technology at the College of the Florida Keys before he joined Mote in December and brought his Caribbean king crab research with him.

At this point Spadaro had anticipated having four or five juvenile crabs at the lab on Summerland Key.

“We have something like 12,000 crabs on campus now and more coming every week,” Spadaro said.

Those crabs will be introduced into areas of the reef to control the algae, so the coral can thrive.

As part of the partnership, the University of Florida’s Institute of Food and Agricultural Sciences and the Florida Aquarium will spawn and breed long-spined urchins.