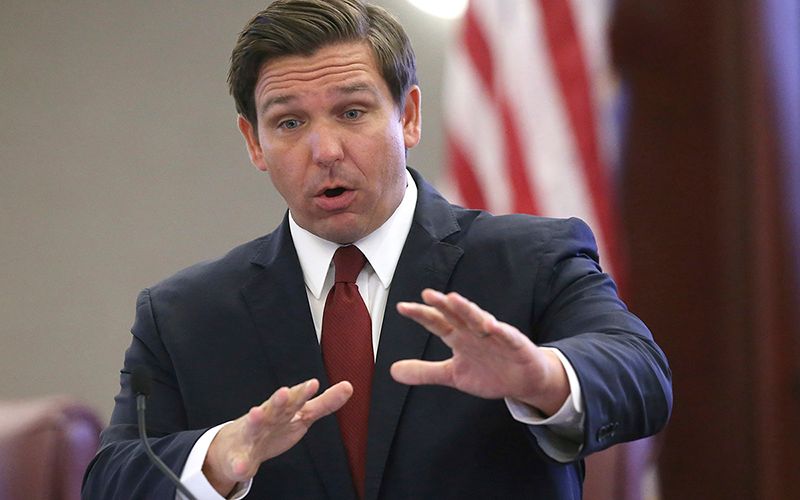 When Ron DeSantis was running for governor in 2018, he found himself in a quandary.

On the one hand, the effects of climate change in Florida—increased flooding in coastal communities, more-active hurricane seasons, and the loss of wildlife habitat—had become impossible to ignore. In the nation’s third-most-populous state, a 2018 poll found that 66 percent of voters considered climate change “a serious problem.”

But the Republican Party was deep in the grip of climate denialism (as has been the case for decades). DeSantis’s predecessor, Governor Rick Scott, had forbidden state employees from even using the term "climate change" and ordered them to refer to sea level rise as “nuisance flooding,” an absurdity that did not escape the attention of the nation’s comedians.

So the Donald Trump–endorsed Republican nominee sought to walk a narrow tightrope.

While he was no “climate change denier,” he said, he did not want to be mistaken for a “climate change believer.” He was not, he argued emphatically, “in the pews of the global warming left.”

Once elected, DeSantis seemed to live up to the expectation that when it came to the environment, he would at least do better than his predecessor. Just days after moving into the governor’s mansion in January 2019, he signed an executive order that called for dedicating billions of dollars to Everglades restoration and protection, improving water quality, creating the Office of Resilience and Coastal Protection, and appointing the state’s first chief science and chief resilience officers. Major Florida newspapers were soon heralding DeSantis as “Florida’s green governor” and “bold on climate change.”