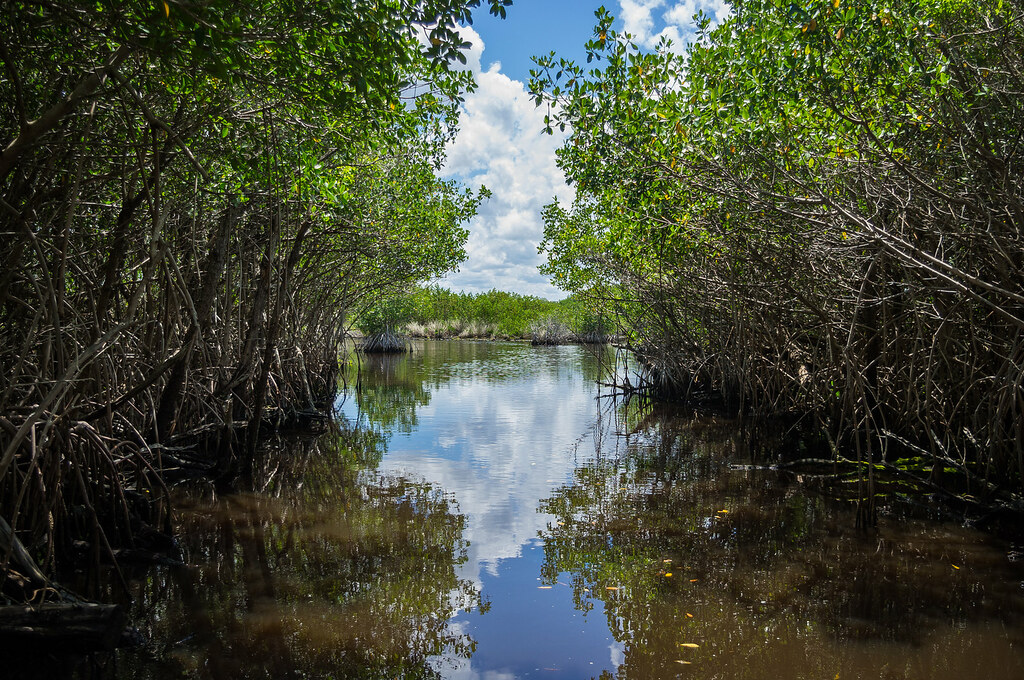 Deforestation of the Amazon basin has garnered attention as concerns rise about climate change. The carbon dioxide the tropical rainforest ecosystem stores has earned its nickname as the lungs of the planet. Collectively, the carbon absorbed and stored through photosynthesis by all types of terrestrial forests is referred to as green carbon. This has led to calls to plant trees to mitigate greenhouse gases. However, there are three ecosystems that store as much or more carbon by the acre than any forest on land. Yet they have received less attention in the fight against climate change. All three of these ecosystems occur in Florida: mangrove forests, seagrass meadows and salt marshes.

“The reason people can walk into the Amazon Forest and appreciate that it’s carbon-dense is there are trees that are 80 to 100 feet tall and five feet around that are just made out of carbon — there’s the carbon — it’s above my head,” said James Fourqurean, Ph.D., the associate director of the Institute of Environment at Florida International University, where he heads the Fourqurean Laboratory for Seagrass Ecosystems Research. He studies the carbon dynamics of coastal ecosystems and is a principal investigator for the National Science Foundation’s Florida Coastal Everglades Long-Term Ecological Research (LTER) site, and a lead scientist in the International Blue Carbon Working Group.

“But in a tropical rainforest, there’s not a lot of carbon stored in the soil,” Mr. Fourqurean continued. “On the other hand, mangroves are places where there’s a forest, so you can see and appreciate that carbon, but the soil underneath them has much more carbon than is in the trees because there’s no oxygen in that waterlogged soil. And seagrasses don’t have nearly the amount of carbon in (living) biomass — they don’t have trees sticking up — but they have a tremendous amount of carbon in those waterlogged soils that they sit on top of. So, seagrasses are small compared to trees, but the Amazon Forest soils contain very low-carbon compared to seagrass soils.”

Some 83% of the global carbon cycle circulates through the world’s oceans. This carbon dioxide absorbed and stored by the oceans is referred to as blue carbon, and 50% of it is stored in coastal regions in these three ecosystems that cover only 2% of total oceanic area. Mangroves occur in southern Florida, salt marshes in northern Florida and seagrasses in both regions. These ecosystems are better at sequestering carbon than the terrestrial forests that have become the focus of climate change activities. This is because microbes that would otherwise break down the carbon stashed below their roots are slowed by the anaerobic environment of the waterlogged muck soil. Likewise, when these marine ecosystems become degraded and the plants die, the stored blue carbon that was beneath their roots is released into the atmosphere.