Southeast
Hurricane Sally brought high wind and flooding to dozens of roads and reached up to some homes in Bay County on Sept. 16, 2020. Patti Blake / The News Herald 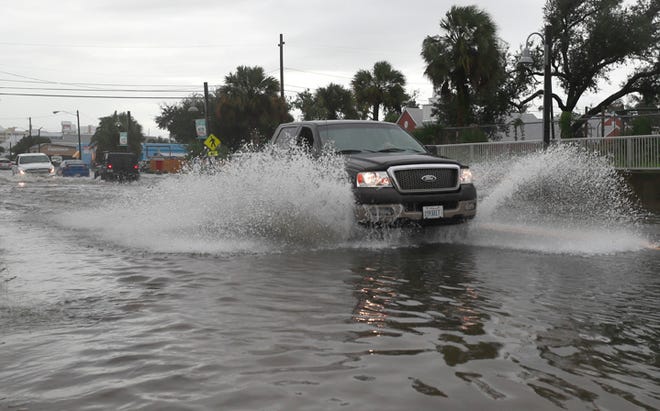 PANAMA CITY BEACH — A local expert said the torrential rains from Hurricane Sally are largely to blame for the recent uptick in bacteria levels at Bay County beaches.

After the Category 2 storm made landfall Sept. 16 near Pensacola and caused widespread flooding, levels of enterococci bacteria in local waters skyrocketed.

According to Joe Scully, environmental supervisor for the Florida Department of Health in Bay County, the bacteria is often found in the intestines of animals and can indicate the presence of fecal matter.

"Typically after a heavy rainfall, we do see the levels go up, and that's normally when we'll ... have to issue advisories," Scully said.

In the week before Sally, no health advisories were issued for any local beach access. That number jumped to seven last week and has since dropped to three. As of Tuesday, advisories were placed on Bid A Wee Beach, Panama City Beach Access 41 and the Carl Gray Park, a press release from the health department said.

The release added that 0-35 enterococci per 100 milliliters of water is considered "good" levels, 36-70 is "moderate" and 71 and up is dubbed poor. All three local sites under advisories tested higher than 71.

"Most of our sampling locations are right near stormwater outfalls, so anything that's in the streets, any retention ponds that feed into that outfall, is going to go out into either the bay or the Gulf," Scully said.

Through the Healthy Beaches Monitoring Program, weekly water quality tests are done at 10 sites across Bay County, ranging from the west end of the Beach to DuPont Bridge. Tests are administered from March until the end of October.