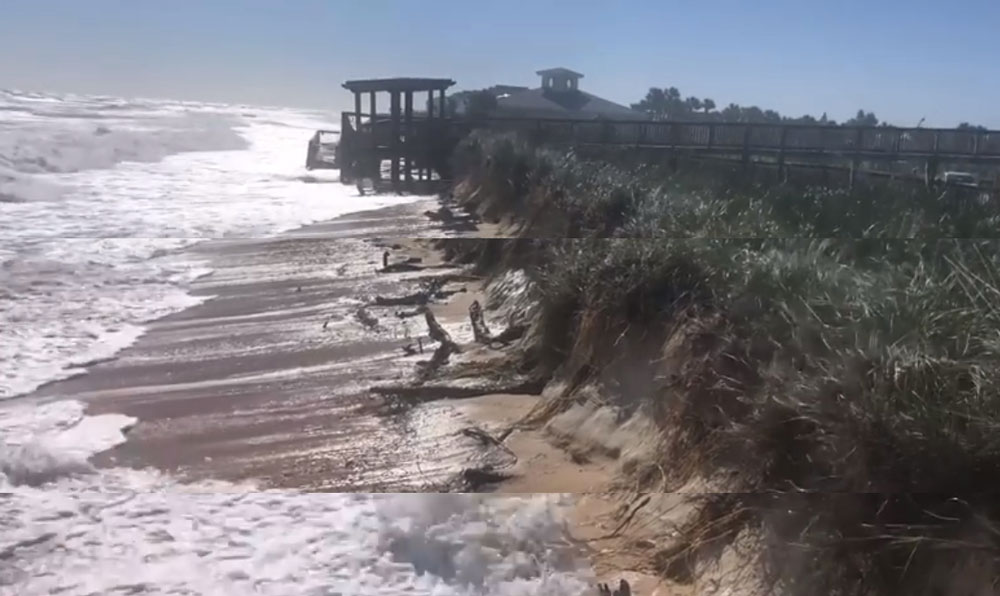 Last weekend’s nor’easter ripped through Flagler County’s dune structures and caused a lot more damage than originally thought, further weakening the dune line that has steadily been losing sand since it was rebuilt in 2018 for $20 million after Hurricanes Matthew and Irma. On-the-ground surveys and drone videos are documenting the extent of the damage.

“It is a lot of damages out there,” said Faith al-Khatib, Flagler County’s chief engineer, after surveying the damage in person. The survey is ongoing. “It looks basically almost like after Matthew, in some areas maybe 20 percent of the sand we built recently just left. It’s very bad.” The engineer described several areas where the dunes drop off into cliffs, their sand simply sheared off as it had been after Matthew, when parts of the Flagler shore looked like mini cliffs of Dover.

The damage is especially obvious in the northern parts of the county’s shoreline. “Most of these areas, the sand is gone there. I know by Hammock Dunes, by Jungle Hut, by Marineland areas, not much left there. So we got beaten really bad with this storm. We did not finalize the assessment yet.” More areas of damage are still being identified.

In parts of Flagler, it appears the storm carved out even more of the dune system than it had during Matthew.

The damage in Flagler Beach was more limited, with the pier reopening Tuesday morning after it was closed for an inspection following the storm. The county is not seeing the severe dune erosion as a failure: the dunes are doing their job. But doing their job means getting progressively sacrificed. “We knew all of us whatever we did, it was temporary, and we had to come up with a long-term plan, we have to identify our resources, and that’s what we’ve been working on and will continue to work on.”