Southeast
One day a year a special confluence of events leads to a burst of life among Florida's reefs. via Mote Marine 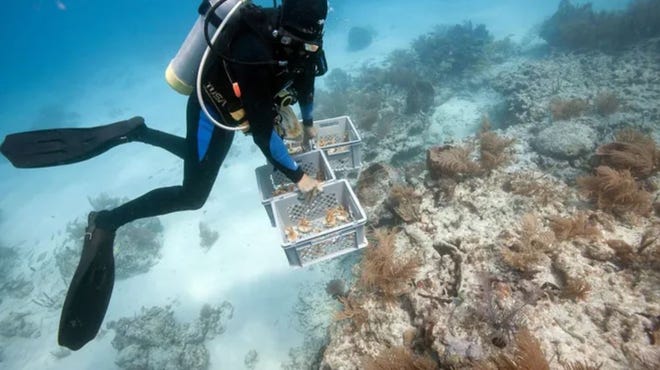 Just once every year, when the tug of the moon and the warmth of the water is just right, coral reef colonies can simultaneously reproduce themselves with a stunning release of tiny new life.

In a dramatic feat of synchronized swimming, coral gametes – complements of egg and sperm – burst from their rocky perches all at once and drift toward the ocean's surface. It's a magical mating rite that generates fertile embryos within a fleeting time frame measured in mere hours.

"The phenomenon," says a refreshingly lyrical explanation from the National Oceanic and Atmospheric Administration, "brings to mind an underwater blizzard with billions of colorful flakes cascading in white, yellow, red, and orange."

The coral larva generated by this process float for days before dropping once more to the ocean floor – where, if conditions are sufficiently welcoming, a new colony can take root.

This month, just when we're all yearning for any kind of genuine uplift, Sarasota's Mote Marine Laboratory brings us tidings of joy: a discovery of the existence of gametes in two coral species that are part of a massive rescue project in the Florida Reef Tract near the Keys.

Mote’s coral reproduction scientist, Dr. Hanna Koch, has confirmed pregnancies at restoration sites of mountainous star coral and branching staghorn coral, both particularly vital to the reef-building process because of their size.

"The presence of gametes," Mote's news release explains, "indicates that these corals are sexually mature, gravid (pregnant), and ready to produce the next generation of coral 'babies' with fresh genetics to help revive declining coral populations."

Mote operates the Elizabeth Moore International Center for Coral Reef Research and Restoration on Summerland Key, where its scientists developed a novel technique, microfragmentation fusion, which harnesses corals' natural healing process and allows them to grow 25 times faster than normal. A process that usually takes decades for the mountainous star coral, for example, has now been clocked at as little as five years.