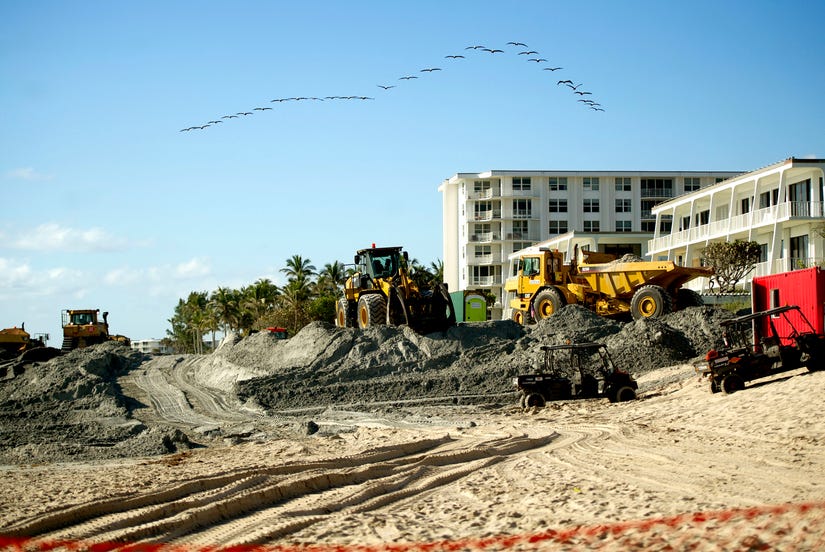 After back-to-back hurricanes depleted the sand at Phipps Ocean Park, the town has begun a months-long project to replace it.

As part of a $9 million beach renourishment project that mirrors one completed at Midtown Beach last May, approximately 400,000 cubic yards of sand will be dredged offshore and then placed along 1.6 miles of beach from the northern tip of Phipps Ocean Park southward to R.G. Kreusler Park near the Lake Worth Pier.

The new sand will replace losses from Hurricane Matthew in 2016 and Hurricane Irma the following year.

The project also includes stockpiling 85,000 cubic yards of sand that will be hauled by trucks to dune-restoration areas throughout the town and South Palm Beach. That portion of the project will cost about $2 million, said Rob Weber, the town's Coastal Program manager.

Work is expected to be complete by May 1.

"This nourishment will directly enhance storm protection from Phipps Ocean Park to the Palm Worth Condominium and includes a sand stockpiling component," Mayor Gail Coniglio said.

"Upon completion, every section of beach south of Sloan's Curve down to the southern town limits will have received new sand to maintain that buffer between our little island and the big blue ocean — just in time for hurricane season."

The Federal Emergency Management Agency will reimburse the town for up to 75 percent of the cost of the beach renourishment project, Weber said. The town has received grants to cover much of the remaining expense.