International
Lemvig in western Jutland, Denmark has coastal protection in the form of a curved concrete wall that winds across the harbour area. Photo credit: Mads Krabbe 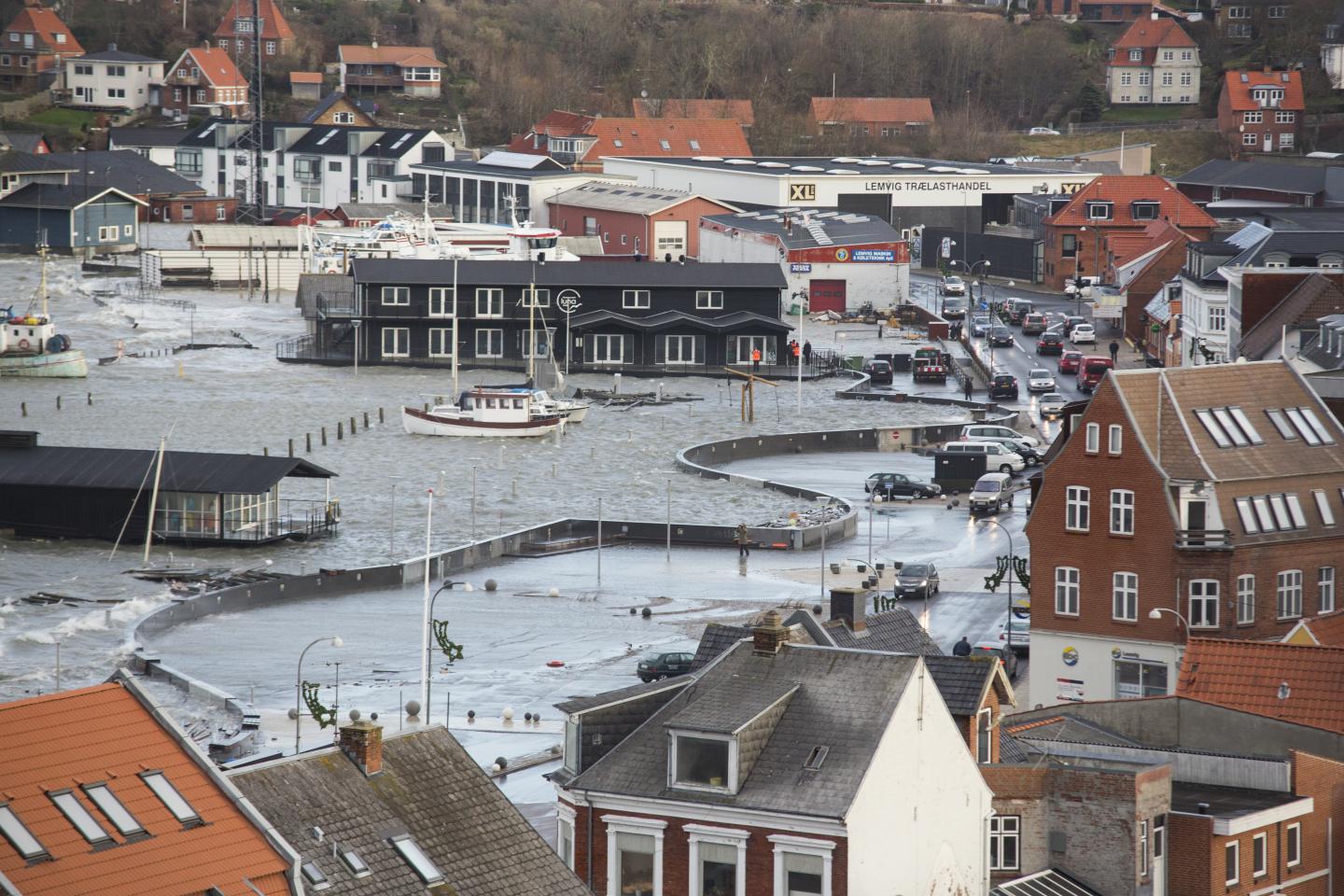 Coastal flooding is becoming one of the most threatening natural hazards in Europe. The exposed population is very large, with 50 million EU citizens living in low-elevation coastal zones at less than 10 m above mean sea level. Today, economic losses are estimated to be Euro 1.4 billion per year

In the freezing reaches of Greenland, fissures in the ice sheet mark the battle lines in the fight against climate change. Greenhouse gases (GHG) are driving up global temperatures, melting the ice and pushing more and more icebergs to break away from glaciers and ice sheets. When the ice melts and the water enters the ocean, it adds to rising sea levels, putting millions of people who live in low lying coastal areas across the globe at risk.

The Greenland ice sheet stores the equivalent of seven metres of sea-level rise, while the Antarctic ice sheet contains about 60 metres, and their rate of melting depends on a variety of factors, including how quickly humans reduce GHG.

‘It is more or less certain that we will not escape from a two-metre sea-level rise,’ said Gaël Durand, an ice-sheet specialist at the Université Grenoble-Alpes in France. ‘The question is now “When will it happen?” Will it be in 100 years or in 2000 (years)?’

This question, of how much and when, is not a simple one –– but the answer is vital for humanity to adapt to climate change. Unlike mitigation, which means reducing GHG emissions, climate adaptation aims at building resilience to the inevitable effects of a changing climate. But in order to adapt, decision makers need reliable information on what will happen to the climate in different regions.

This is where climate predictions and projections from scientific research play a crucial role: predictions attempt to provide estimates in the short-term — for example, the average annual or seasonal temperature in five years; whereas projections extrapolate what could happen in the long-term, under different possible futures, determined by more or less ambitious mitigation responses.

In the EU-funded PROTECT project, Durand and colleagues are working on projections, to more accurately determine what will happen to the ice sheets in a world of rising temperatures and how this will impact communities living in coastal areas.

‘We want to provide projections, but we want to be sure that these projections fit the needs of users, particularly coastal users,’ said Durand.

More than 200 million Europeans live within 50 km of the coastline, but rising sea levels will affect them all differently. ‘Typically the needs are very different, depending on the use you have of coastal land,’ explained Durand.

Using satellite and remote sensing data, as well as ice sheet data, the PROTECT project models how the ice sheet behaviour in Greenland and the Antarctic, as well as glaciers, will impact people on a regional and even local scale, with case studies in France, the Netherlands, Greenland, and the Maldives (in the Indian Ocean). ‘We work with stakeholders and practitioners to better understand what type of projections they need,’ Durand says.

Co-design with users is a feature of another EU-funded project, the European Climate Prediction System (EUCP), this one focusing on predictions. In the past, ‘it was often the climate scientist speaking and the user listening’, said Jason Lowe, science lead for the project and the UK Met Office’s principal fellow and head of climate services for government. ‘But we realised that the successful projects were when the user speaks more and the climate scientist listens and adapts to that.’

‘You need different types of information to inform the solution.’

The EUCP brought together users and organisations interested in climate predictions, as well as superusers which had specific problems to solve, to see how climate science could bolster their adaptation strategies.