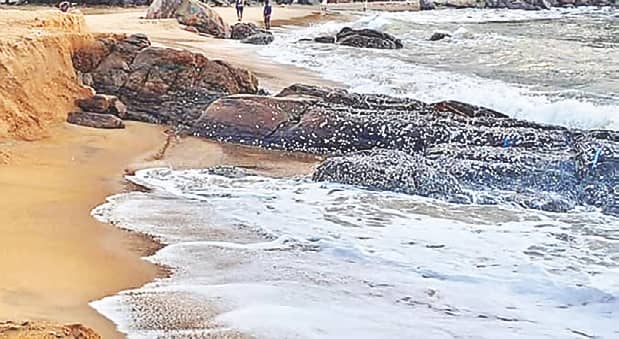 Projects to protect beaches have come under criticism, as millions have been poured in, despite failing to produce the desired results.

“In 2017, Rs 1.2 billion had been allocated from the budget while cabinet approval was also been given to develop beaches strategically using rock revetments,” environmentalist Sajeewa Chamikara said.

He pointed out that the recent Colombo South Beach Nourishment Project has also failed to produce the desired results, despite spending Rs 889 million on the project.

“It must be clearly said that an environmental assessment had not been carried out about the project,” Samantha Gunasekara, another environmentalist adds.

A Denmark-based company had been awarded the tender for the recent project that saw sand being dumped on the beaches of Kalutara, Angulana, and Mount Lavinia.

Lilani Ruhunuge, the Chief Engineer of the Department of Coast Conservation, said sand has been deposited so that it will gradually move towards areas facing erosion.

However, experts have pointed out that the project is not practical as the sand is being washed away by the waves.