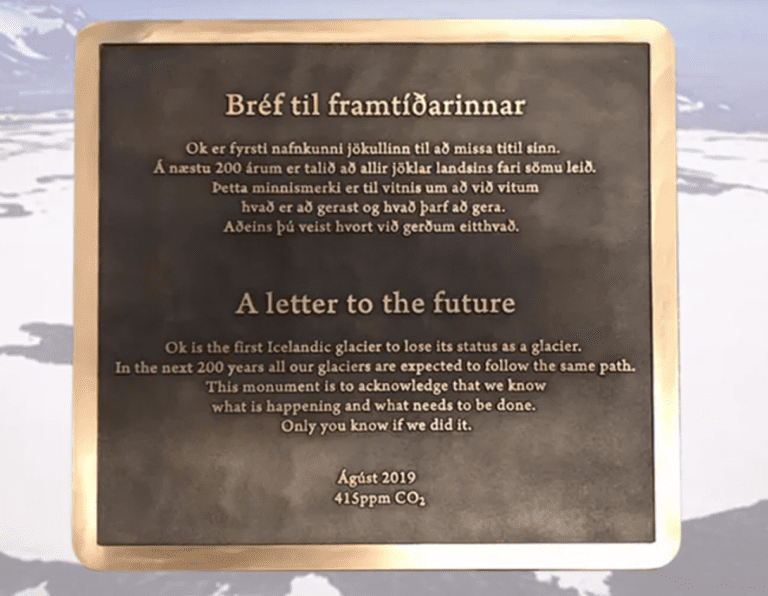 I grew up in Iceland and this summer I visited with my Long Island-born children the second-largest ice cap there, Langjökull (“Long-glacier”). From 1980 to now, metal stakes mark the significant retreat this glacier has made each decade. A full 80 percent of its mass is predicted to melt by the year 2100.

Nearby a bronze plaque next to an icy puddle memorializes the first glacier to melt in Iceland.  It reads: “In the next 200 years all our glaciers are expected to follow the same path. This monument is to acknowledge that we know what is happening and what needs to be done. Only you know if we did it.” Carved beneath these words is the atmospheric CO2 content in August 2019, or 415 ppm CO2.

Recent data warns that the Arctic is warming four times faster than the global average, or much more rapidly than previously thought. While most of the world has experienced on average 1℃ degree warming compared to temperatures at the onset of the Industrial Revolution, the Arctic is committed to a positive feedback loop termed polar amplification.

The melting of the Greenland ice sheet threatens to raise global sea levels by several feet. At present, it’s impossible to predict the catastrophic consequences from thawing permafrost and the subsequent release of methane and other greenhouse gases. Include here the uncertainty and potential health risks from the release of viruses and bacteria, previously immobilized by glacial ice. A study published in the journal Microbiome last year uncovered 33 viruses in samples of 15,000-year-old Tibetan glacial ice, of which 28 were novel.

In addition to Arctic melting, a sobering report published in Nature Geoscience journal this month warns that we should expect the melting of Antarctic ice sheets to add to the rise in sea levels in the near future. In a press release titled “Doomsday glacier could collapse in five years,” researchers warn that Antarctica’s Thwaites Glacier, at roughly the size of Florida, is already destabilized and currently losing 50 billion tons of ice a year.

These changes may seem like they’re happening far away from Long Island, but we’re connected to the rest of the world through the global water cycle. Jeff Berardelli, meteorologist and climate expert, exclaimed in a CBS interview this month: “We’re inches away from tipping points. It’s not going to happen linearly anymore, it’s not going to happen gradually anymore. Once we hit these tipping points things can happen quickly,” he added: “Like a domino effect, everything starts to become unstable.”

Ten thousand years of climate stability are behind us. How do we respond appropriately here at the North Shore of Long Island? We continue to build luxury apartment buildings and villas at the waterfront! Wait, what? We’ve got to prepare for the worst and stop placing people in harm’s way. Building into FEMA-declared flood zones is both unsafe and guaranteed to cause future financial burden for taxpayers.

It’s ecological insanity to continue concrete coastal development that is simply inferior to nature’s fury when it comes to paying our climate debt. Flood events from sea-level rise are guaranteed, so are intense storm surges and flash flooding from extreme rainfall. Climate chaos will continue to threaten our man-made structures, physical safety and socioeconomic well-being. The upside to all this potential destruction is that we can look to nature for solutions.