Hawaii & Alaska
Massive die-offs of Dungeness crab have been documented off the Pacific Northwest Coast. Once dead, the aquatic crabs often wash up on beaches, such as the ones photographed on Kalaloch Beach on June 14. NOAA photo/Jenny Waddell 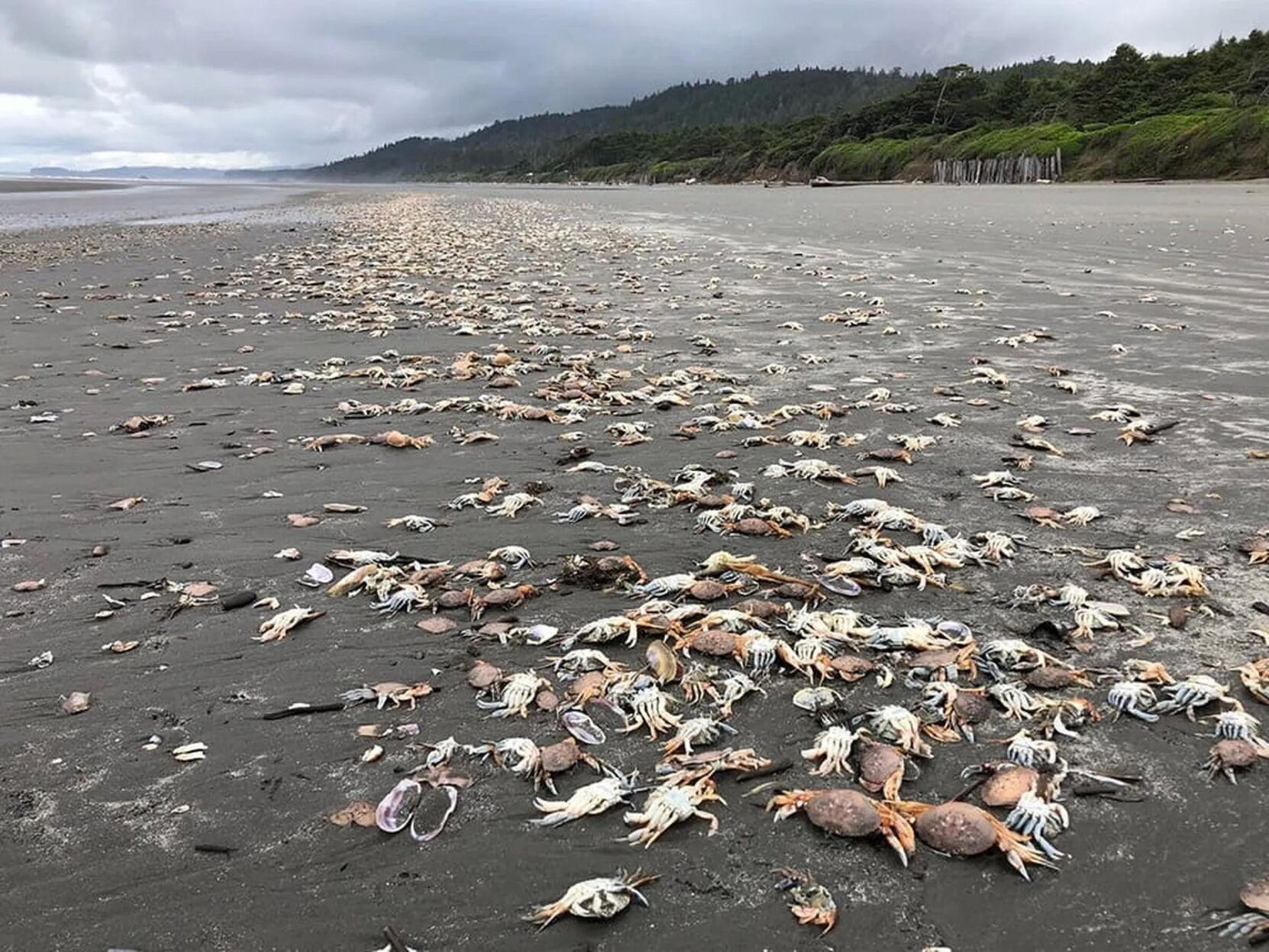 SEATTLE — Terry "Chop" Arnold Jr. remembers the first few times he climbed in his dad's 36-foot fishing boat at an old log boom, near the northernmost tip of Washington.

"I started going out with him when I was 10," said Arnold, a Makah tribal fisherman. "And I never looked back."

For decades, Chinook salmon were plentiful along the beach, he said. But in the '90s, the Arnolds had to trawl as far as 30 miles offshore to find fish.

Fishing for many species has proved pretty steady over the years for Arnold. But lately, there have been seasons where there's little or no crab, he said.

Not too far down the coast, piles of dead Dungeness crab washed ashore on Kalaloch Beach this summer. Meanwhile, fishers have shared stories about hoisting up dead or suffocating crabs in their pots, said Jenny Waddell, research ecologist with the Olympic Coast National Marine Sanctuary.

Now, scientists are working to understand how climate change is affecting Dungeness crab, which is both culturally significant and a pillar of Washington's seafood industry. From 2014 to 2019, coast-caught Dungeness was worth an annual average of $45 million.

At the beginning of November, the National Oceanic and Atmospheric Administration announced a $4.2 million award for a four-year study on Dungeness crab and krill that will bring together researchers and experts from coastal tribes, public universities and federal agencies from Northern California to Washington.

The ocean absorbs about 30% of the carbon dioxide released in the atmosphere, primarily from human activity. Increases in the gas in the ocean have led to rising acidity. Studies have shown as acidity rises, shellfish struggle to maintain hardy shells, their growth slows, and death rates rise.

Over the last 20 years, the Olympic Coast sanctuary in Washington has monitored a changing marine environment. Where there's typically vertical mixing to distribute nutrients, at times ocean waters have become stratified, trapping oxygen-deficient, acidic waters against the seafloor, Waddell said.

Along the Pacific coast, Dungeness crab live in the intertidal zone out to a depth of about 560 feet. Washington's coastal commercial crab fishing ground spans from the Columbia River to Cape Flattery near Neah Bay.

About a decade ago, Oregon State University researchers confirmed that an increase in ocean acidification was definitively related to the collapse of oyster seed growth at a commercial oyster hatchery.

Meanwhile, harmful algal blooms have led to complete and partial closures of Dungeness crab fisheries up and down the West Coast. The blooms are rapidly growing bunches of algae that can produce dangerous toxins.