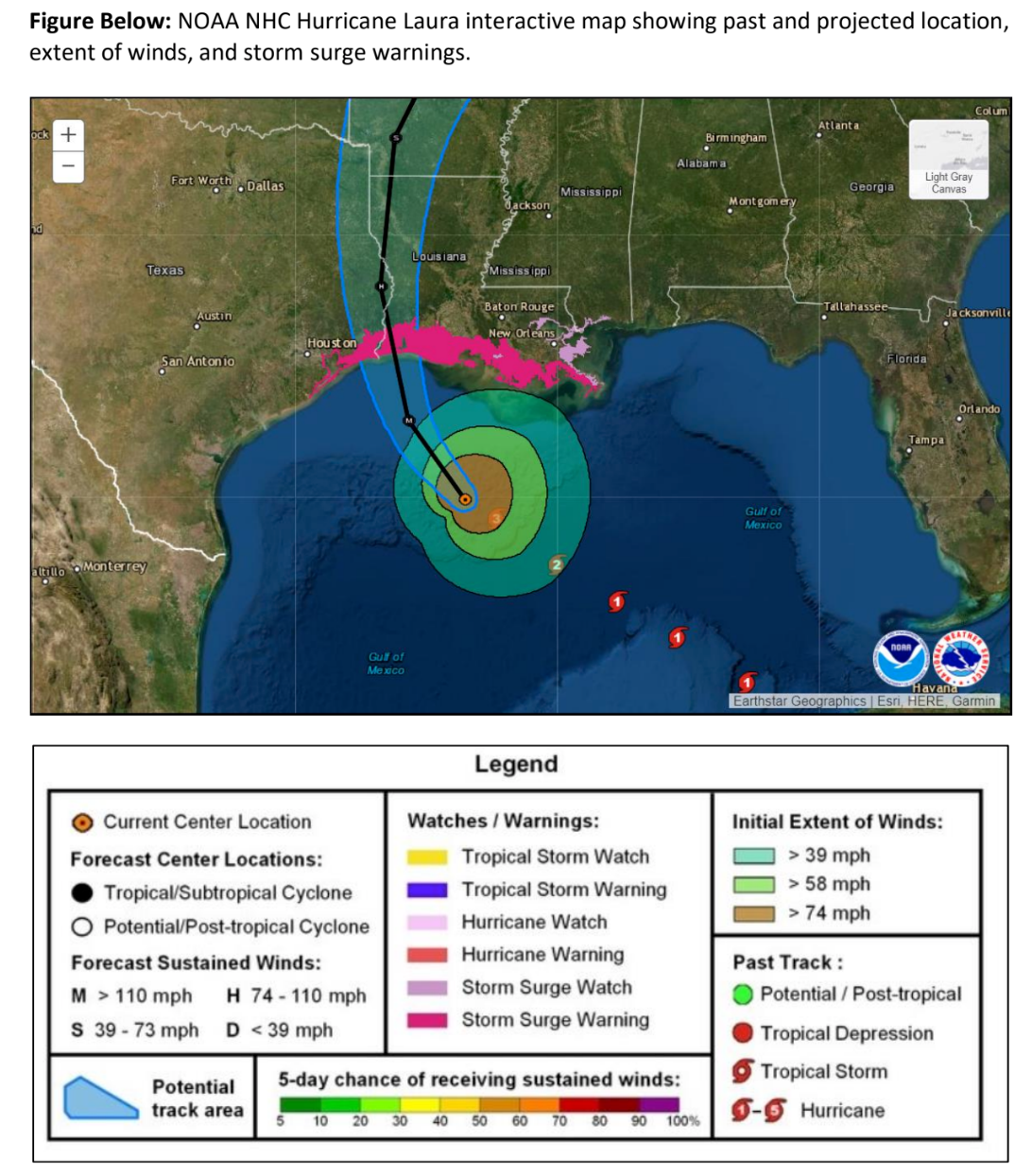 Please see the latest analysis for the Program for the Study of Developed Shorelines at Western Carolina University. We will be following the storm closely and will be releasing follow-up products post-storm.

1) As of 11 AM EDT Wednesday, storm surge has already been recorded by water level gages
stretching from Dauphin Island, Alabama to east Texas. These elevated water levels will persist
through tomorrow. Though landfall is projected to occur near the Texas/Louisiana state line, the
elevated water levels combined with very high storm waves will cause beach/dune erosion in
Alabama and Mississippi as well. Extremely vulnerable areas such as the west end of Dauphin
Island, Alabama will experience overwash and flooding even on the periphery of the storm.

2) Laura is pushing plenty of water in front of it following a consistent northwestward track across
the Gulf. The storm is approaching a concave embayment with a broad, shallow continental
shelf. Hurricane Rita followed a similar course in 2005. Rita was a somewhat larger storm which
reached Category 5 before making landfall as a Category 3 storm. Therefore, we believe that
Rita is a reasonably good indication of the expected impact from Laura. Hurricane Rita
generated a maximum storm tide of approximately 17 feet just east of Cameron, Louisiana.
Storm surge penetrated as far inland as I-10 in Lake Charles, Louisiana with surge heights around
8 feet.

3) One caveat: If Laura does not make the projected turn to the north, but instead takes a straight-
line course towards Galveston and the Bolivar Peninsula in Texas, we would expect a higher

storm surge. The direction of approach matters. Significant turning before landfall reduces the
“envelope” of water being pushed ahead of the storm.
4) The State of Louisiana has recently completed multiple coastal protection projects under the
state’s Master Plan. These projects dot the Louisiana coast all the way west to Sabine National
Wildlife Refuge in Cameron Parrish. The projects include a wide variety of storm and flood
protection approaches: beach and dune building, marsh restoration, hard structures, and
others. Hurricane Laura may be the first significant test for many of these projects.

5) The good news is that the projected impact area is not heavily developed in those locations
likely to experience the highest storm surge and the greatest wave energy (along the immediate
Gulf Coast). However, if anyone tries to ride out the storm in a place like Holly Beach, they will
likely be sorry.

6) The bad news is that the communities of Port Arthur, Texas and Lake Charles, Louisiana are very
important for the nation’s petroleum refining and distribution infrastructure. Crude Oil prices
have already risen in anticipation of output interruptions.

Director, Program for the Study of Developed Shorelines