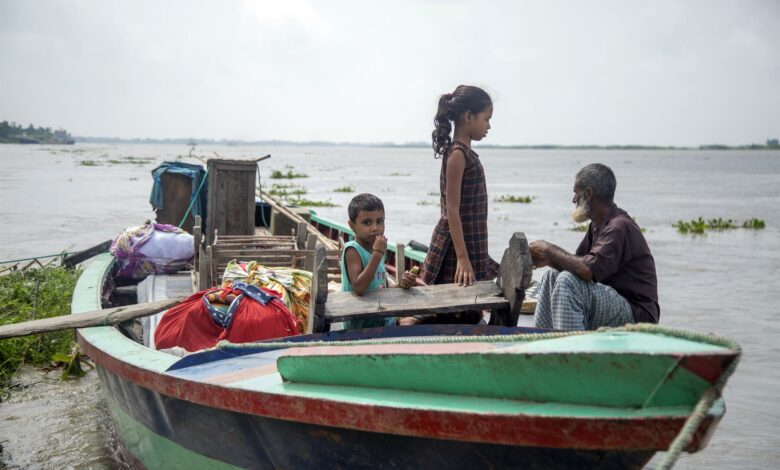 Dhaka, Sep 14 (EFE).– Bangladeshi fisherman Mohammad Hanif has become homeless thrice in his six decades of life as intermittent floods kept sweeping away river banks and the surrounding neighborhoods.Every year, hundreds of thousands of people are forced to flee their homes in Bangladesh due to climate change-induced erosion, cyclones, and salinity in river flows.

Hanif lost his first home when he was just 10 months.

His parents built a new house 10 km away from the bank of the river Meghna in Bangladesh’s southwest Bhola district. But that too got eroded decades later.

As he grew up, Hanif, now 62, took fishing as his profession.

Fishermen have to live close to the river. Hanif built a new home on the river bank, eventually losing it three times.

A devastating cyclone in 2007 came as the last straw.

Hanif was at the estuary of the river Meghna close to the Bay of Bengal with 11 other people, including his three siblings, when they realized that Cyclone Sidr was going to hit Bangladesh’s coast.

He may abandon the fishing net and seek refuge on an island. That, however, would have meant a financial suicide.

Hanif had invested everything he had in the net and the boat.

He and other fishermen patiently got the net back, braving the huge waves before rushing for shelter.

“But the damage was done as the net had become unusable,” said Hanif.

“During those years, fish also became a scarcity. I had to pay my debt. One-and-a-half years after the cyclone, I almost had to flee from debtors to Dhaka,” Hanif told EFE in Dhaka’s Kalyanpur slum.

The slum on 17 acres is home to 9,555 people from 2,688 families, according to the non-profit BRAC, which runs an urban development program.

Tuhin Alam, the program coordinator, said their survey found that climate-related disasters had displaced 21 percent of the slum dwellers.

Most of the residents in the slum, which survived several incidents of fire and eviction attempts, came from Bangladesh’s riverine southwestern districts.

Ayesha Bibi came some 30 years ago with her seven younger sisters after their entire village was wiped away.

“We don’t even know what happened to our neighbors,” said Bibi, who works now as a plastic waste collector, the most common profession of the slum dwellers.

According to a World Bank report released in March 2018, the number of people displaced by climate change in Bangladesh could reach 13.3 million by 2050, making it the country’s number-one driver of internal migration.

River erosion is the most significant cause of permanent displacement in present Bangladesh.