Gulf of Mexico
Photograph of oil beneath the surface of the Gulf of Mexico during the Deepwater Horizon spill (background). In the inset, microscopic specimens of Candidatus Macondimonas diazotrophica are visible both inside and around the edges of oil droplets (large round shapes) in this microscope image. Credits: Rich Matthews/AP images (photo); Shutterstock/CoreDESIGN (DNA illustration); and Shmruti Karthikeyan (inset) 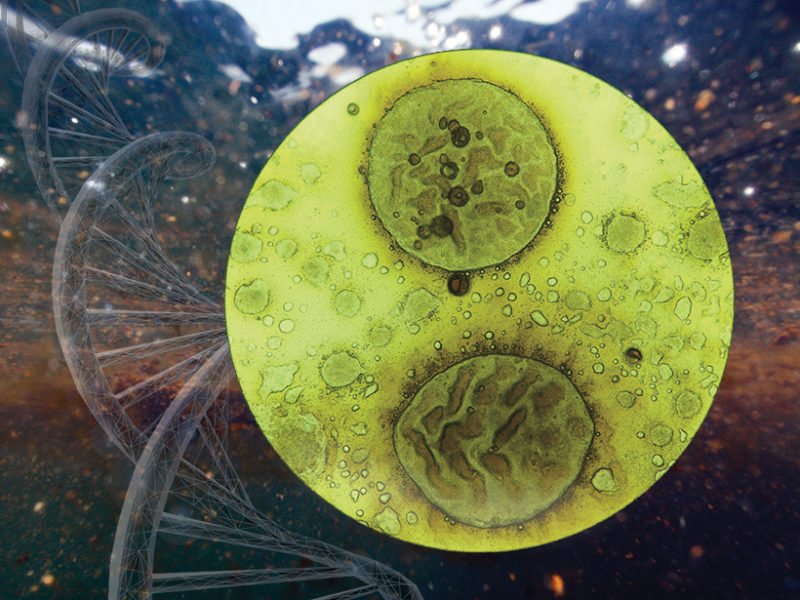 Deepwater Horizon and the Rise of the Omics

Almost everywhere scientists have looked on or near Earth’s surface—from ice-buried Antarctic lakes to arid, ultraviolet-baked deserts and ecosystems ranging from pristine to heavily polluted—they have found abundant and often highly diverse populations of microorganisms. Microorganisms, or microbes, are everywhere; they are adaptable, and they play key roles in element cycling and ecosystem functioning in nearly every environment on Earth.

Microbes are the great decomposers in ecosystems, breaking down dead and dying organic matter and recycling major nutrients for use by plants. And by reacting rapidly and adapting to changing conditions, they act as first responders in helping restore balance and stability to ecosystems after such disturbances as pollution or catastrophic storms. Microbes are, for example, intimately involved in ecosystem responses to oil spills.

Like organic matter derived from modern-day primary production, oil formed over geologic time can act as a carbon source that fuels microbial growth and metabolism. Hydrocarbon-degrading microbes have been studied for decades and are thought to be ubiquitous and diverse and to have adapted to consuming oil over millions of years [Head et al., 2006]. And biodegradation mediated by indigenous microbial communities is considered the primary fate of most petroleum (oil and gas) that enters the marine environment through natural mechanisms like seeps [Leahy and Colwell, 1990].