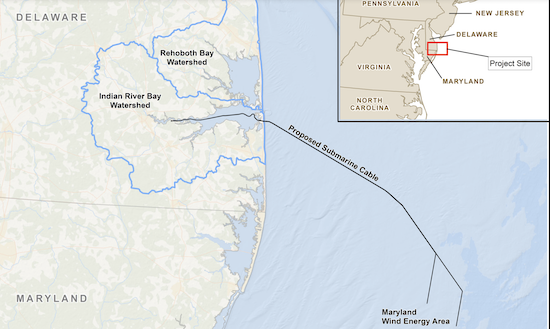 Both the US Wind and Øersted’s Skipjack projects are moving in the direction of moving electricity generated from wind turbines 19 miles offshore to a grid connection in Delaware.

Indian River Bay is a likely location with US Wind studying a Bay location, according to a filing with the Bureau of Ocean Energy Management (BOEM).

Ørsted is also eying Indian River Bay after an earlier plan for a power line to come ashore at a portion of Fenwick Island State Park ran into issues in the environmentally fragile area.

The Cape Gazette reported last week that US Wind is routes that would go under Delaware Seashore State Park and connect to a Delmarva Power substation near the Indian River Power plant.

Any project affecting the park would require approval from the Delaware Department of Natural Resources and Environmental Control.

The adjacent NRG Indian River plant’s last coal-fired unit had been slated for closing this summer, but grid operator PJM recommended that it stay open longer to allow improvements to stabilize the grid.

The power plant’s owner – who made the closing decision after wholesale power auction winners came in with rates that were below the figure needed for the profitable operation of Indian River – would be compensated during the period the generating plant remains open.

During that period, Grid improvements could be made, perhaps in preparation for wind-powered electricity coming ashore.