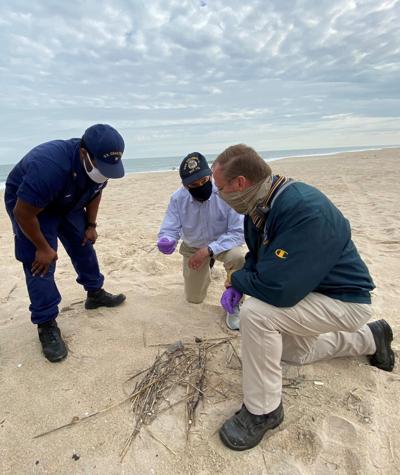 After sustained cleanup operations for last month’s oil spill in Delaware Bay spearheaded by the Delaware Department of Natural Resources & Environmental Control and the U.S. Coast Guard, under a unified command, Delaware’s beaches have all been declared substantially “cleared,” officials announced on Nov. 13.

Cleanup crews are prepared to respond to further oiling, and shoreline monitoring will still take place, they noted. The public is being asked to report any sizeable sightings of oil or oily debris, or oiled wildlife, to DNREC’s toll-free environmental hotline, at 1-800-662-8802.

The month-long multi-agency response to tar patties began on Oct. 19, after reports of oil patties impacting the Delaware shoreline from Fowler Beach, and downward along the Delaware Bay coast to the state’s Atlantic Ocean beaches from Cape Henlopen to Fenwick Island and to Assateague Island State Park in Maryland. As of late on Nov. 13, officials said, the only cleanup that remained was an area of Gordon’s Pond, part of Cape Henlopen State Park. It was expected that area would be clear on Monday, Nov. 16.

“As the unified command suspends, and we pick up the final bits of oily debris, we can reflect on consolidating our environmental resources into a model of teamwork that eliminated this threat to our coastline,” said DNREC Secretary Shawn Garvin. “We are grateful for the commitment by our federal partner, the U.S. Coast Guard, to see it through, and for the DNREC responders — including emergency response personnel, environmental scientists and engineers — who worked to avert serious harm to our environment, particularly to our beaches. The collaborative effort under the unified command has accomplished its goals in combating this oil spill.”