Center for the Inland Bays representatives provide U.S. Sen. Tom Carper, right, with a tour of the CIB's shoreline protection project under its Living Shorelines initiative in October of 2020. Coastal Point • Submitted 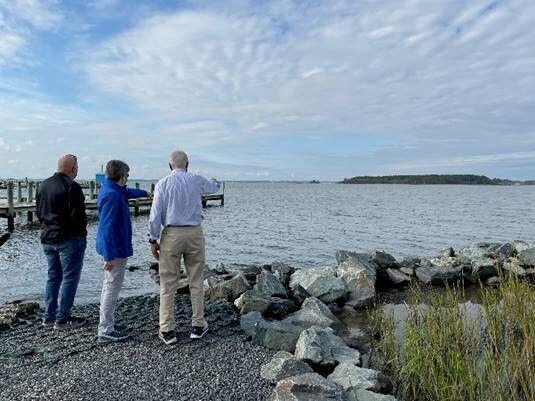 Under the Infrastructure Investment & Jobs Act, signed into law by President Joe Biden on Monday, the Delaware Inland Bays located near Rehoboth Beach, Dewey Beach, Bethany Beach and the South Bethany could see up to $4.5 million in additional restoration dollars over five years, through the EPA’s existing funding vehicles.

“The total funding in the Infrastructure Act for bays and estuaries in the EPA’s National Estuary Program is $132 million,” said Chris Bason, executive director of the Delaware Center for the Inland Bays. “If you divide that by the 28 National Estuary Programs and account for some federal grant administration … of inland estuarian bays, that would equate to about $900,000 of available funds to EPA for each bay program for five years.

“Of course, EPA has to agree to the need for this conservation funding,” he said.

And the EPA must first consider and finalize their approach to distributing the funds outlined in the Act.

For the Chesapeake Bay alone, there is an extra $238 million over the next five years — a little over $47 million each year — available under the Infrastructure Act. That’s a more than 50 percent increase from current funding levels (of some $90 million per year), according to the Chesapeake Bay Foundation,

“We are excited about the ongoing commitment,” said Bason.

This Friday, Nov. 19, the Center for the Inland Bays will sign an Inland Bays Comprehensive Conservation & Management Plan (CCMP) at the Hyatt Hotel in Dewey Beach. The CCMP is similar to a city plan outlining the roadmap to achieve a thriving community, said the CIB outreach team.

“The CCMP serves as a solutions-based approach to move the needle towards cleaner Bays, healthier habitats, and sustainable communities,” they said.

The Inland Bays — the Rehoboth, the Little Assawoman and the Indian River bays — cover 32 square miles of watershed but drain from a land mass of some 320 square miles. The population boom and development growth has added an additional 34 square miles to the watershed over the past decade.