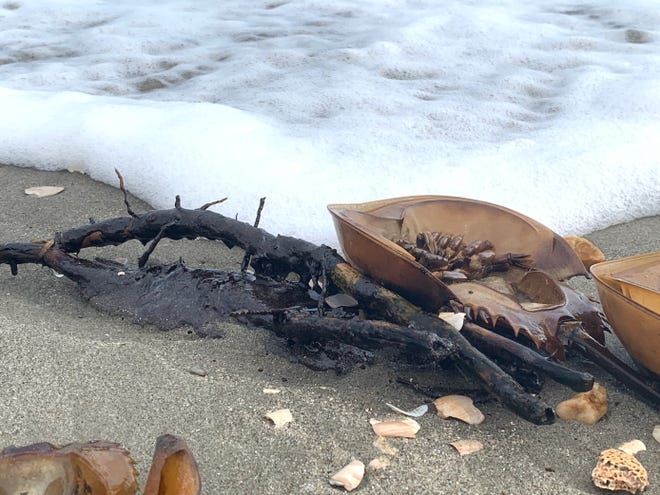 As the Delaware Department of Natural Resources and Environmental Control continued assessing and cleaning an oil spill that came ashore Monday afternoon at Broadkill Beach, the agency has determined the affected area has grown.

The spill is now estimated to affect up to 7 miles of coastline, including Beach Plum Island near Cape Henlopen, the Roosevelt Inlet and Lewes, DNREC said Tuesday afternoon in a news release. Local residents informed a Delmarva Now reporter Tuesday there is also oil on Prime Hook Beach.

“We’ve found oil on the shore so far; we’ve not really seen it in the water per se," said James Bethard, chief of state emergency prevention and response for DNREC's Emergency Response & Strategic Services Section. "It’s all been brought in by the high tide, deposited up in the rack line area."

DNREC crews are just now beginning to explore beaches to the north, Bethard said. Updates will come about whether areas such as Slaughter Beach are affected.

The initial estimate given by DNREC was that the spill affected three-quarters of a mile of coast at Broadkill Beach. But Monday night's high tide carried out some of the oil into the Delaware Bay and then dispersed it elsewhere on the coast by noon on Tuesday, Bethard said.

Most of the visible oil is in small spots: the tide has fragmented the oil from larger pools to smaller speckles on the beaches, the release states. In a release of their own, the Coast Guard referred to the spots as "oil patties" and said they range from the size of a quarter to the diameter of a manhole cover.