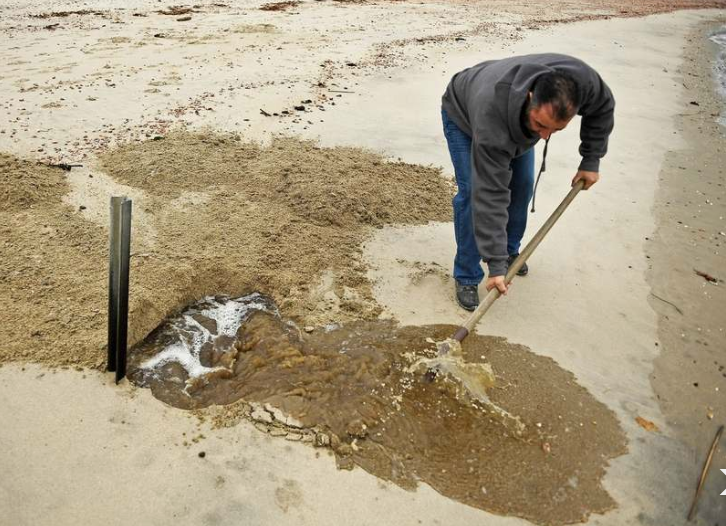 White Sand Beach residents Harry Gough and Rich Lemieux say they have to get out a shovel every time it rains to keep the flooding at bay.

Flooding happens because water in the marsh adjacent to their homes has nowhere else to go, they said. They blamed a clogged drain pipe that extends as part of an underground culvert system from the marsh to Long Island Sound.

So they make the trek from their doorsteps, along the invisible path atop the 18-inch pipe, across the beach and down to the metal pole that signals the drain's outlet. Then they dig out the sand around and inside the pipe so that water can flow again.

It's a problem that's been going on for years, according to the neighbors.

"Pretty much every time it rains, we have to do this," Gough said Sunday morning shortly after low tide as Lemieux opened up the pipe in a gush that continued unabated as they talked. Gough said it would likely continue for four or five hours before the flooding on their properties goes down.

Gough said the most pressing need is the replacement of the final, 20-foot section of pipe that washed out to sea during a 2018 storm. He described it as a "temporary fix," estimated at about $1,000, that would buy time to hire an engineering firm to come up with a long-term plan and to identify grant funding sources.

The residents, who both moved to the area in 2014, said the problem became more pronounced after the section of pipe was swept out to sea in 2018. They said they've been trying for years to get somebody to take responsibility for the problem with no success.