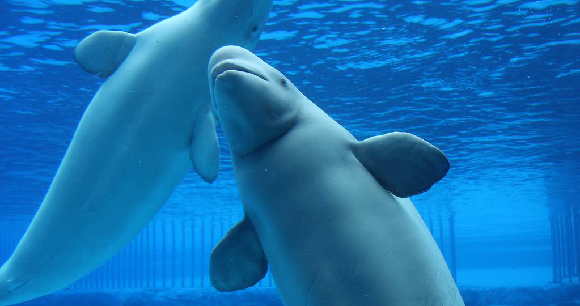 Washington, DC—The Animal Welfare Institute (AWI) and other animal and environmental protection groups applaud the Department of Commerce’s decision to prohibit Mystic Aquarium from breeding five captive-born beluga whales from Canada as part of an import permit issued Friday. The permit also precludes Mystic from training the whales for performance.

The Connecticut aquarium applied for a permit last year to import the belugas from Marineland, a marine theme park in Niagara Falls, Canada, for the purpose of scientific research. Among other research projects, Mystic proposed behavioral and reproduction studies, including breeding and research on pregnant females and their progeny, raising concerns that the real purpose of the import was to perpetuate the captive beluga population for public display in the United States. Moreover, under a partnership between Mystic and Georgia aquariums, three of the whales could eventually be transferred to Atlanta. The permit conditions clarify that the National Marine Fisheries Service (NMFS) must approve any decision to transfer the animals.

In issuing the permit Friday, NMFS authorized seven of Mystic’s eight research projects; it did not authorize the study related to reproduction. The permit conditions prohibit the aquariums from breeding the whales, using them in public interactive programs (such as photo opportunities), or training them for performance.

The permit restrictions come after a group of animal and environmental protection organizations submitted comments in December opposing the permit, outlining their substantive legal and policy objections under the Marine Mammal Protection Act (MMPA). These groups urged the inclusion of the no-breeding and no-performance clauses in a permit if one was issued, as well as the clarification that NMFS — not the permit holder —should make any decisions regarding the disposition of these whales.

On this episode, Peter Ravella and Tyler Buckingham welcome Dr. Naomi Rose to the show to discuss the science and ethical considerations of cetacean (that's whales and dolphins, folks!) live capture, trade and captivity. Dr. Rose is the marine mammal scientist for the Animal Welfare Institute in Washington, DC. She has been a member of the International Whaling Commission (IWC) Scientific Committee since 2000, where she participates in the subcommittees on environmental concerns, small cetaceans, and whale watching. She has authored or co-authored over 45 scientific papers and articles for animal protection publications, as well as chapters in several books.