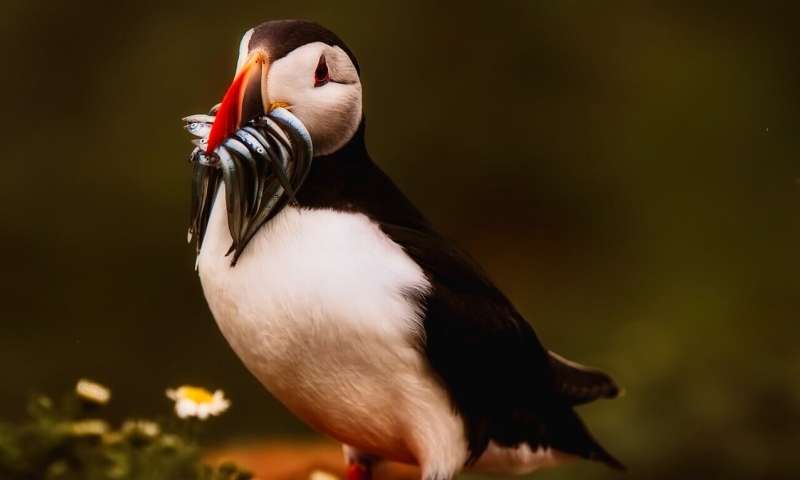 CT - New research on the sand lance, 'a quintessential forage fish' for seabirds and marine mammals

A slender little fish called the sand lance plays a big role as "a quintessential forage fish" for puffins, terns and other seabirds, humpback whales, and other marine mammals, and even bigger fish such as Atlantic sturgeon, cod, and bluefin tuna in the Gulf of Maine and northwest Atlantic Ocean. But scientists say right now they know far too little about its biology and populations to inform relevant management, climate adaptation and conservation efforts.

A collaborative team of 24 coauthors, including UConn Marine Sciences Professor Hannes Baumann and Professor Emeritus Peter Auster, who also serves as Senior Research Scientist at Mystic Aquarium, and led by first author and marine ecologist Michelle Staudinger at the University of Massachusetts Amherst's Northeast Climate Adaptation Science Center, this week is calling for increased focus on sand lance and their ecological role in the region's dynamic ecosystem, which is facing increased pressure and risks from climate change, fishing, and offshore wind energy development. Details are in the current issue of Fish and Fisheries.

Two species, American and Northern sand lance, are so streamlined that they can dive at swimming speed into the sandy sea floor, burrowing to escape predators. Staudinger explains, "They're unique among forage fish because of their elongate body shape and hiding behaviors. Their shape makes them very attractive to many predators because they're easy to swallow. Most marine predators don't chew their food, rather they swallow their food whole. It's like eating spaghetti instead of a meatball; there are no legs or spines to get caught in your mouth or throat. Even small seabird chicks can swallow large sand lance because they slide right down into the gullet."

Sand lance are an unmanaged forage fish in the region, so there is no priority for collecting data on abundance and how they are distributed. "Sand lance occur in large schools that make them tasty targets for large predators. They are high energy food. When populations decline, there are fewer schools and this requires predators to spend more time and energy searching. Switching to other less nutritious prey species can affect growth of predators, and have cascading effects through the ecosystem," said Auster. "Also, sand lance lay adhesive eggs that can anchor to the seafloor. Disturbances of eggs from storms and fishing gear may affect survival, but we have little concrete information in this regard."