International
This image, which was captured by the Copernicus Sentinel-2 mission on March 16, 2017, takes us over Barcelona – the second largest city in Spain. Credit: Contains modified Copernicus Sentinel data (2017), processed by ESA, CC BY-SA 3.0 IGO 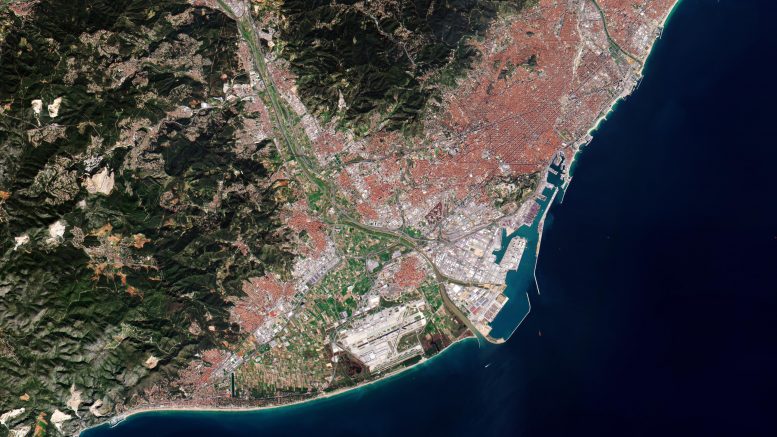 The Copernicus Sentinel-2 mission takes us over Barcelona – the second largest city in Spain.

On the northeast coast of the Iberian Peninsula, Barcelona occupies a low plateau along the Mediterranean coastal plain. The city and its red roofs contrast with the forested hills and the sea that surround it.

The famous Avinguda Diagonal avenue can be seen in the right of the image. The road is one of Barcelona’s broadest avenues and cuts the city diagonally in two, hence its name. The circular Plaça de les Glòries Catalanes was meant to be the city center in the original urban plan, but nowadays is used largely as a roundabout.

Dominating the left side of the image are the Garraf Massif mountains, their cliffs reaching the Mediterranean coast. Its highest point on the coastal side is La Morella – almost 600 m above sea level.