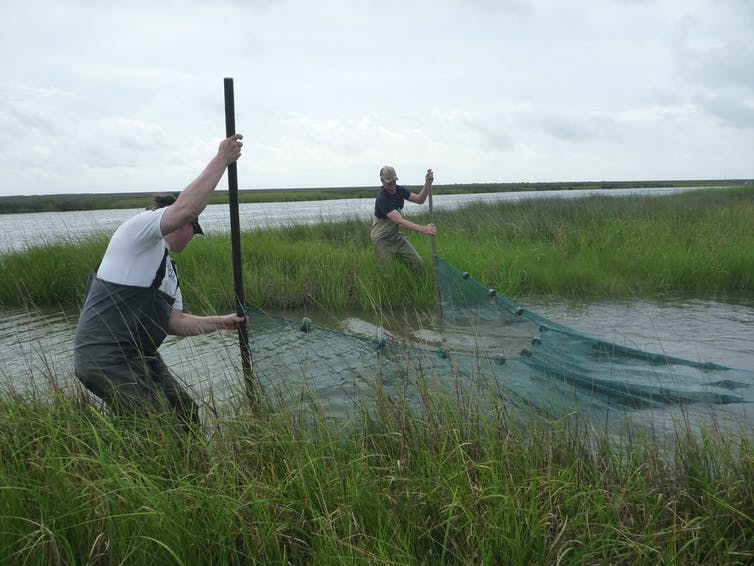 Coastal fish populations didn’t crash after the Deepwater Horizon spill – why not?

When the Deepwater Horizon oil spill released 4 to 5 million barrels of oil into the Gulf of Mexico in 2010, some early projections estimated that the toll on fisheries could reach US$5-10 billion by 2020. Chemicals in crude oil may affect fish and other marine creatures directly, through their toxicity, or indirectly by harming their food or habitat, and the effects can be immediate or long-term.

I began conducting marine science research in the northern Gulf of Mexico in 2006, and was immediately taken by the diversity of fishes, water bodies, habitats and economic sectors along the coast. This region is still home to my favorite saltwater environments – places like the Chandeleur Islands off Louisiana, and Florida’s St. Joseph Bay.

From 2006-2009, I worked with teams studying the ecology of fishes that inhabit the tidal salt marshes and underwater seagrass meadows of the northern Gulf. As the Deepwater Horizon spill unfolded, I shared many other people’s deep concerns about the terrible human toll, and the ecological and economic damage to places like the sensitive shores where I had worked.

Ten years later, though, there’s some welcome good news. In our research, my colleagues and I have found that the Deepwater Horizon spill did not appear to cause significant oiling injury to coastal fish populations.